After almost-unending leaks and rumours, itâ€™s official: vivo will be launching a new iQOO smartphone with the Snapdragon 855+. Reports and TENAA already confirmed that the smartphone will be an upgrade over the recently released vivo iQOO Neo 855. For that reason, we will call this one vivo iQOO Neo 855+.

The new name is seemingly confirmed as vivo has just announced that the new refreshed flagship will arrive tomorrow in China. 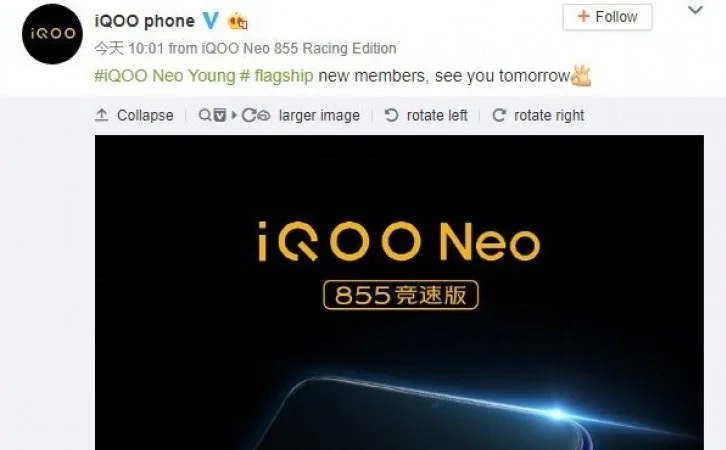 vivoâ€™s official WeiboÂ account announced the arrival of this new flagship smartphone. The device emerged yesterday inÂ AnTuTuâ€™s benchmark with a whopping 503,734 score. Therefore, it sits at the top of the Snapdragon 855 Plus-powered smartphones.

According to TENAA, the vivo iQOO Neo 855+ boasts a 6.38-inch AMOLED display with FHD+ resolution. On the rear, there is a 12MP module leading a triple-camera array. Thanks to AnTuTuâ€™s listing we know that there is a particular variant with 12GB of RAM and 128GB of Storage.

The new iQOO Neo 855+ will be vivoâ€™s second iQOO handset to ship with the Snapdragon 855+. The first one was the iQOO Pro which also boasts 12GB of RAM. Since both smartphones feature the same chipset, we are curious to see which kind of strategy Vivo will use with the newer model. Perhaps, the Neo 855+ will reach only certain markets to avoid direct competition with its Pro sibling.

Join Us On Telegram
ALSO READ:  vivo Releases List of Second Batch of Devices To Get OriginOS Public beta
Advertisment

WhatsApp Is Working On A Quick Media Editing Feature, To Be...