The Nokia C series was very one of the most popular devices back in the days when Nokia was still the king of smartphone. The series had both smartphones and feature phones, thus offering different options for consumers pockets. Now HMD Global is reviving the series with the new Nokia C1. The new phone was launched in Kenya today.

The Nokia C1 is an entry-level smartphone targeted at Africa, the Middle East, and Asia-Pacific. Starting with its design, the handset looks like the Nokia 1 Plus which also runs Android Go, also an entry-level phone. However, there are some design differences.

The Nokia C1 has a hole for the speaker on the back just like the Nokia 1 Plus but the hole is on the left side rather than on the right. The Nokia C1 also has an LED in front alongside the selfie camera. Other than these two differences and of course the slightly different shade of red, you will not be wrong to call this a rebranded Nokia 1 Plus.

Talking about its specs, the Nokia C1 features a 5.45-inch FWVGA+ IPS display just like the Nokia 1 Plus. The spec sheet says it is a â€œtoughened glass displayâ€. It has a 5MP f/2.4 rear camera with an LED flash and another 5MP camera with LED too up in front. There is 1GB of RAM and 16GB of expandable storage along with an unnamed 1.3GHz quad-core processor.

It has a dedicated Google Assistant button on the left side of the phone, a MicroUSB port, Dual SIM support (nano only), an audio jack, FM radio, Bluetooth 4.2, and a MicroSD card slot (64GB max). It also has GPS and 2.4GHz WiFi.

HMD Global has cut corners with connectivity by not including support for 4G, so you are limited to just 3G. That is not an issue as the phone is targeted at those who are switching from a feature phone to their very first smartphone. 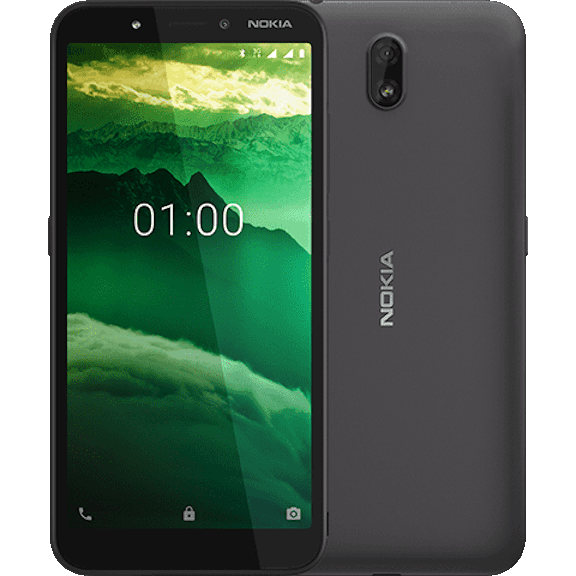