According to Counterpoint Market Monitor report, in the first half of 2019, the Chinese smartphone market slumped because of factors like the economic downturn in China and the prolongation of consumer replacement cycles. This resulted to drop in the overall shipments by 9% year-on-year.

In the third quarter, the Chinese smartphone market declined by 5% year-on-year but increased by 3% month-on-month. The year-on-year decrease was moderate in comparison to the previous two quarters. In the fourth quarter, Counterpoint Market Monitor expects the overall decline in the Chinese smartphone market to slow further. On the whole, the Chinese market has gradually recovered from the second half of 2019. It is expected to rebound in 2020, ending the year-on-year negative growth trend that has lasted 9 quarters. 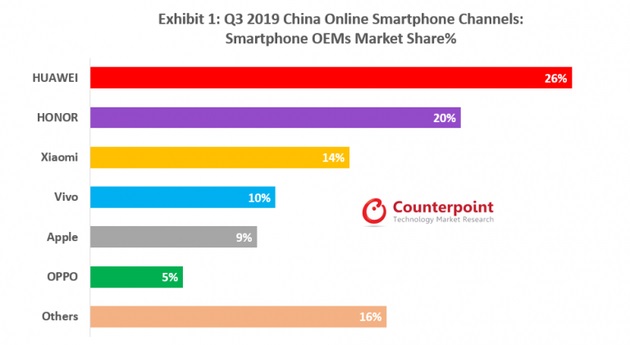 This company also believes that the main driving forces for the market recovery in the second half of the year are twofold: one is the active online market; the other is 5G commercial use.

In the third quarter of 2019, although the Chinese smartphone market declined, the online market was still active due to factors such as summer online promotion, e-commerce platform discounts, seasonal brand promotions, and improved logistics efficiency. As Counterpoint claims, online sales in the Chinese market accounted for about 27%. By the way, in the first quarter of this year, this number was equal to 24%.

In terms of brand performance, Top 6 smartphone brands accounted for 84% of Chinaâ€™s online market in the third quarter, an increase from 79% in the first quarter of 2019. Counterpoint data shows that in the third quarter of this year, Huaweiâ€™s domestic market share of online smartphones reached 26%, ranking first, followed by Honor 20%. In other words, the total share of these two brands reached 46%.