Google Chrome recently introduced tab grouping to its desktop and Android version and following that, Google had started testing the new ‘Duet’ functionality in the app that brought the browser’s UI to the bottom, making it easier to access.

Now, in an bid to make the Chrome browser’s UI more clean, the tech giant is reportedly testing a new UI change that integrates the tab group UI with the Duet redesign in Chrome Dev and Canary.

The new feature was first reported by 9to5Google, can be enabled in Chrome Dev and Canary builds by enabling a Chrome flag* “Duet-TabStrip Integration”. The description for this flag states that it “Allows users to access integration of Duet and TabStrip.”

I try to access the new UI in Chrome Dev and Canary on my both Android phones and a couple of device around me but the new UI didn’t show up for us. However, based on screenshots shared by 9to5Google, with the new flag enabled, Chrome hides the tab-group UI inside the tab button in the toolbar. It can be made visible by long pressing on the tab button, and comes up as a floating toolbar above the bottom toolbar in Chrome. There’s also a button to hide the tab group UI if needed. 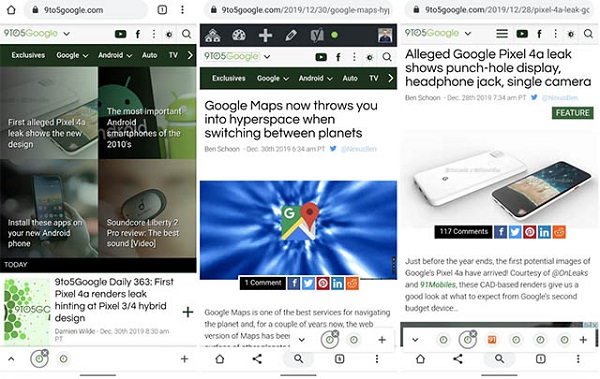 While the new UI looks cleaner, it does add an extra interaction to get to the group of tabs you have open on your smartphone, which doesn’t feel like the best way to go about it especially considering that tab groups should prove most useful to people who have a lot of tabs open on their phones and are looking for an easier way to manage them.

Advertisement
ALSO READ:  Facebook Is Developing Its Own Operating System, An Alternative To Android

How To Enable Chrome Flag

To enable Chrome Flag, copy and paste the below to your chrome browser;

Covid-19: WhatsApp Limits Some Of Its Messenger’s Functionalities