To Make calls with your Windows 10 PC connected to an Android smartphone is now possible for all users, thanks to the latest update of Your Phone app. The functionality has been under test for a while now in the Insider channel, but few hours ago, the company’s official Twitter account indicated it starts to be available on the stable channel.

However, please note that the distribution is gradual. And maybe for the moment, it is limited to some markets. Often Microsoft starts from the United States, its homeland, and then expands to Europe and other continents. 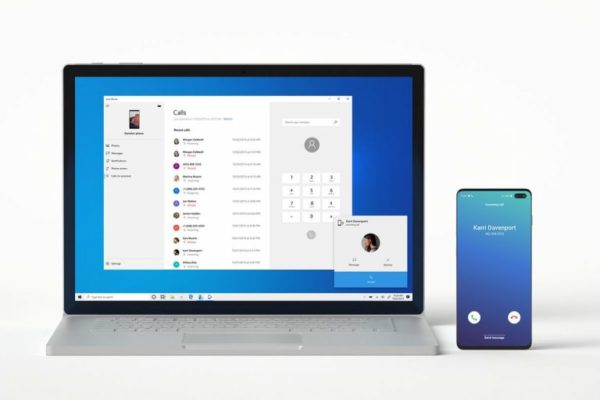 â€œThank you #WindowsInsiders for your feedback over the last couple of months. Today, weâ€™re pleased to announce the general availability of the #YourPhone app Calls feature, which allows you to receive and make phone calls on your PC: https://aka.ms/YourPhoneâ€Â tweeted Windows Insider.

Thank you #WindowsInsiders for your feedback over the last couple of months. Today, we’re pleased to announce the general availability of the #YourPhone app Calls feature, which allows you to receive and make phone calls on your PC: https://t.co/m47kLcXgbS pic.twitter.com/4GuIOXjR71

Your Phone must be installed on Windows 10 PCs if it is not already present. While on Android the official companion app must be downloaded from the Play Store. You can find the links below. Once the two devices communicate, different tabs appear. Such as SMS, recent photos and, in fact, calls. From here it is possible to call any number in the phonebook. If a phone call arrives on the smartphone, it is also possible to answer from a PC.

Warning! A Fake Windows 10 Update Has A Ransomeware Hidden In It

It is worth mentioning that as Microsoft has just released its new update of Windows 10, a new phishing campaign is taking the advantage to spread in the form of an email, prompting users of Windows 10 to install a critical update.

Researchers at Trustwave have released details of this new threat. It attempts to trick users into hijacking their PCs and demanding a ransom.

The e-mail, which is currently in English and seems to come from Microsoft, has the subject â€ Install Latest MicrosoftÂ Windows Update now!â€ or â€œCritical Microsoft Windows Update!â€ And prompt the reader to install the included update as an attachment. In reality, it is a program that downloads a ransomware called Cyborg.

WhatsApp: You Can Now Assign Individual Wallpapers to Different Chats

President Muhammadu Buhari’s Health: Gloating is of no value