Though the year cannot be seen as the most profitable year for smartphone makers, Apple is still holding on to the majority of profits. According to the latest Counterpoint Research report, the Cupertino based tech giant controls a massive 66% of the total industry profits despite only generating 32% of all smartphone revenues for Q3 2019 globally.

What’s amazing, is the fact that this is before the yuletide period when Apple usually sees its highest sales figures. For reference, in Q4 2018 Appleâ€™s profit share was within the range of 80% and profits for Q4 2019 are expected to continue in the same vein. 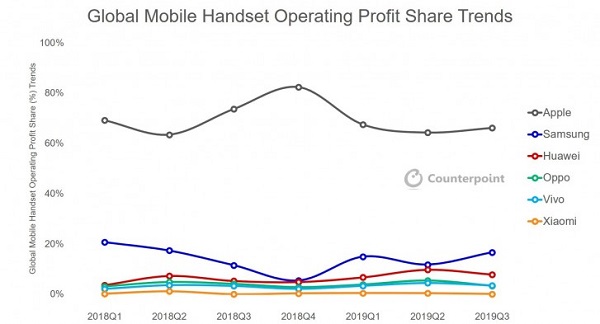 Looking through the rankings, Samsung is the second largest earner for the July – September period as it amassed 17% of the overall profits, thankful to the strong sales of the Galaxy A and Note10 series. The rest of the high earner pack includes Huawei, Oppo, Vivo and Xiaomi.

Counterpointâ€™s Karn Chauhan notes that Chinese brands are slowly managing to improve their profit margins however they are nowhere near the margins that Apple manages. On the other hand, 2020 is touted as the year of 5G commercialization and the Chinese players will all benefit from the push to 5G and will be able to increase their average asking prices.

Advertisement
Join Us On Telegram
ALSO READ:  Xiaomi Mi Mix Fold vs Samsung Galaxy Z Fold2: Who Is The King Of Foldables?
Advertisment