WhatsApp has recently been in the news for all manner of reasons. Just yesterday, there were reports that WhatsApp is permanently banning all users that belong to groups with illegal or suspicious names. Now, the latest unpleasant news now, is that WhatsApp users are displeased with the latest version of the popular messaging app, complaining that it is draining their batteries. Some have taken to Google Play Store to vent their frustrations.

If you are one of those experiencing a rapid battery drain of recent, WhatsApp could be the main culprit. Well, this only affects handlers who have the latest version of the messaging app. A Reddit user said:

â€œA week ago, I noticed that the battery on my OnePlus 6 started draining faster than usual. This coincided with an update of WhatsApp which I installed on my phoneâ€¦My phone strangely shows that WhatsApp used battery â€˜While in active useâ€™ for 1.5 hours, which is not true since I only opened the app for a minute.â€ 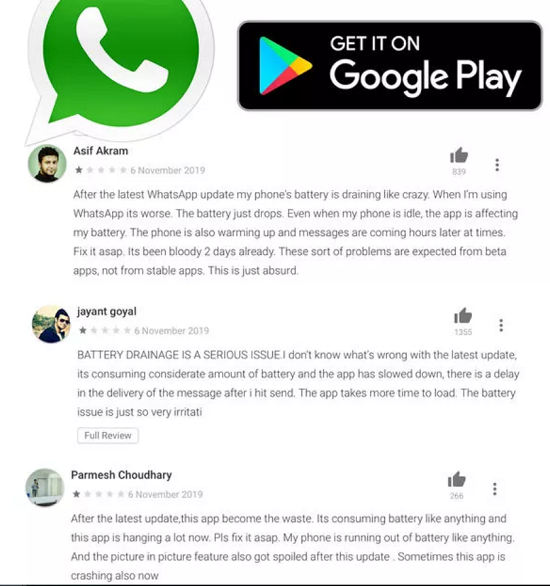 A user of a OnePlus smartphone said on Google Play Store review that:

At present, no word on the cause of the widespread issue or how it spreads. However, we are certain that this issue comes with WhatsAppâ€™s latest version for Android. This recent update allows users to lock access to WhatsApp even if the home screen is open. When enabled, this useful new security feature will prompt WhatsApp users to place their fingerprint on the scanner when the app is loaded-up to prove itâ€™s really them.

Well, since there is no information on the solution, we suggest you uninstall the latest version. Then, you can get an older version from a friend via any app transfer medium. Weâ€™ll update this article if we hear more about the battery drain glitch. Nevertheless, you need to check if your WhatsApp is significantly draining your battery.

How To Check Your Phoneâ€™s Battery Usage

To do this head to Settings > Battery > then tap the three dots in the top corner and select Battery Usage > Then press the three dots and again and tap Full device usage.

Startup adds beds and Wi-Fi to buses to turn them into...