Facebook app users are already getting the dark mode on Android. A good number of users have been able to switch the appâ€™s mobile interface to the dark side.

According to Android Police,Â Facebook is currently offering the dark mode to some users of its Android application. On social networks, such as Reddit or Twitter, testimonials show that this dark mode is already available to some users, especially in India, Malaysia and Italy. 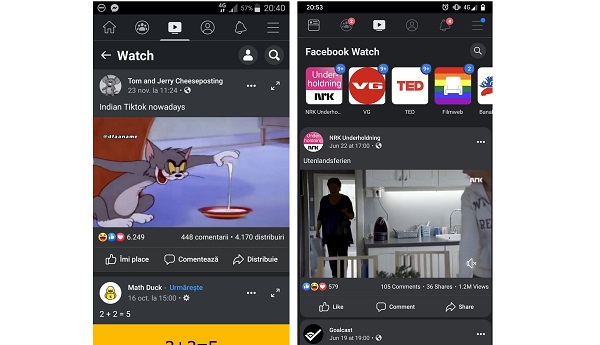 Given the tradition of the Californian group, perhaps it is a small scale test, prefiguring a global deployment. The company also proceeds in this way for the hiding of the likes counter of Instagram.

It is unsurprising. A few months ago, Manchun Wong discovered the first traces of a dark mode in the code of the Android app. More recently, the social network has also added a dark mode to the desktop version of its interface. For now, we do not know when this mode will be available for all Android users.

These new testimonials finally offer a complete overview of the dark mode of Facebook (see screenshots above). As we can see, Facebook put on a lighter background than for Facebook Messenger for example. Instead of a deep black, it is a dark gray that protects the application. The hue varies greatly from one user to another.

Gradually, all the applications of the Facebook brand pass on the dark mode. After Instagram and Facebook Messenger, Facebookâ€™s turn has come. Only WhatsApp, whose dark mode is still in development, will remain for the deployment to be complete.

Join Us On Telegram
ALSO READ:  Facebook Was gathering Your Call And SMS Data For Years
Advertisment

WhatsApp Video Calls To Allow Up To 50 Participants, Thanks To...