If you are one of those who have been patiently waiting for Xiaomi to release the new MIUI 11 Global update, well, the here are some good news for you. According to a post from the MIUI India Twitter account, MIUI 11 will start rolling out from October 22nd.

The update will come in batches, with more popular and newer devices getting the update first. A â€˜total of 28 Xiaomi and Redmi phonesâ€™ will receive the MIUI 11 update over the next two months. Below are the features expected on the new UI. 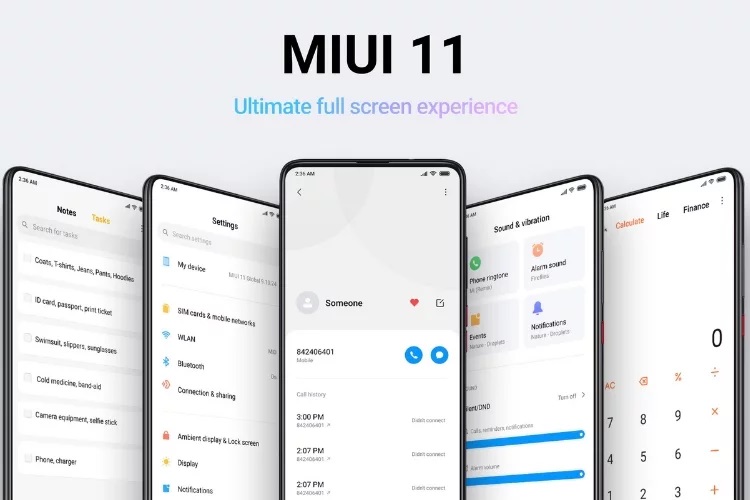 First off, Xiaomi has adopted a minimalist approach with MIUI 11. It has toned down its color scheme, introduced a new font called Milan Pro, and introduced the much-awaited dark theme with this update. The Always-on Display has received an overhaul with the MIUI 11 update and now lets you set dynamic clock styles, animated stickers, and well, personalized messages to set your device apart from others.

Xiaomi also talked about how 2 million wallpapers are now being offered to MIUI users using the Wallpaper Carousel features. It has perked up the wallpaper feature and now allows you to set â€œdynamic video wallpapers.â€Â It could be anything from your gallery as well.

MIUI Work portfolio of apps have bagged an upgrade, with the Mi File Explorer will now show you file thumbnails and lets you view them within the app itself. Their document viewer has been updated to let you make minor changes to documents on the fly. Also, Xiaomi has added aÂ â€œto-do and reminder featureâ€ to its Tasks app and it syncs to your calendar as well. The best part â€“ you can even make voice tasks.

Our File manager app has seen an upgrade in #MIUI11. You can now view your files as thumbnails & also view them without any additional app support. You will also be able to perform essential actions on your documents with this addition. pic.twitter.com/yb7qdvFIUL

MIUI 11 also updates the native Mi Calculator app, which can now be used in a floating window for improved multitasking. This functionality is also being extended to all your messaging apps (as well as the dialer) with the new Quick Replies feature, so that you could continue playing that game or watching the video without having to log out of the same.

Smartphones are a part and parcel of our lives â€“ something we use all the time, so the MIUI 11 update also focused on three Mi Life features. The first is a step tracker thatâ€™s easily accessible from the App Vault on the homescreen.

The Mi Calendar app introduces an essential feature for female Xiaomi users. They can track their menstrual cycles using the calendar app, instead of relying on a third-party application or second-guessing when the next cycle starts. 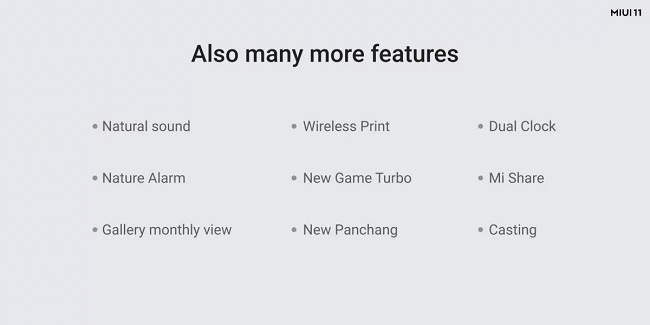 Phase 1: This first wave will begin on October 22nd, all the way up until October 31st. The devices that will be receiving the MIUI 11 update are popular devices like the POCO F1, Redmi K20, Redmi Y3, Redmi 7, Redmi Note 7, Redmi Note 7S, and Redmi Note 7 Pro.

Phase 3: The Phase 3 for the update will begin on 13 November and the devices included for this are the Redmi Note 6 Pro, Redmi 7A Redmi 8, Redmi 8A, and Redmi Note 8.

Phase 4: The Redmi Note 8 Pro will be the sole device for Phase 4 which will start on 18 December and will end on 26 December. 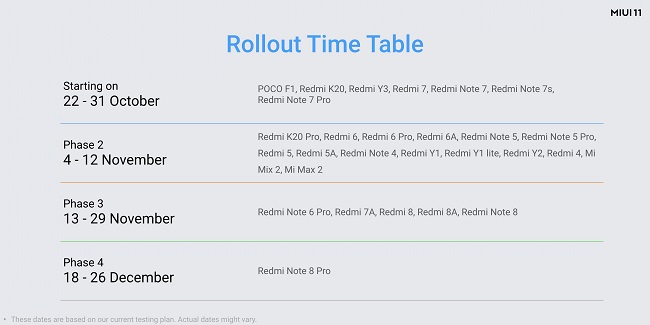 You could see that MIUI 11 is a big update for XiaomiÂ that changes up a lot of things for the popular UI.