Ubuntu is an open source GNU/Linux operating system based on desktop applications. Ubuntu is based on Debian GNU/Linux and supports x86, x64, ARM and ppc architectures, built by a global professional development team (Canonical Ltd).Â Its name was derived from the word “ubuntu” in Zulu or Hausa in southern Africa, similar to the Confucian “benevolence” idea, meaning “humanity”, “my existence is because of the existence of everyone”, is a traditional African one. Cool!

Ubuntu has achieved good results since the release of “Warty Warthog”. Currently, the distribution is the most popular version of Linux in the market. According to data from w3tecs.com, Ubuntu leads the other Linux distributions with a market share of 37.4%, while Debian ranks second with 21.2%.

In January 2010, Ubuntu only accounted for 8.9% of the market, ranking behind Debian, CentOS, Red Hat and Fedora, and was the fifth Linux distribution at the time. 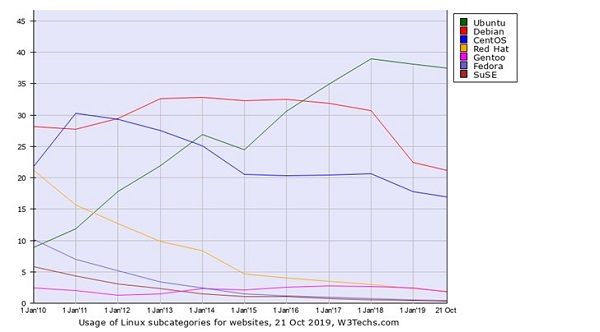 Since its birth 14 years ago, Ubuntu has produced many successful branches, such as Linux Mint, elementary OS, Zorin OS, Pop!_OS and KDE Neon.Â There are also some derivatives of Ubuntu, including Lubuntu, Kubuntu, Xubuntu, Ubuntu Mate and Ubuntu Budgie.

Last week, Ubuntu 19.10 “Eoan Ermine” was officially released, bringing a lot of new features, including the ZFS file system. Ubuntu 20.04 (codenamed TBD) is also on the agenda, and the Ubuntu team is already preparing for it, which is scheduled for release in April 2020.

From Warty to Eoan’s fifteen years of crazy journey, from cloud to cluster, from desktop to data center, it is at the forefront of Linux development, and the audience is getting wider and wider, not just individual users, many companies also use it as Put into production release, let us expect Ubuntu to bring more surprises…

PinePhone Is An Affordable Linux Smartphone