It’s now more than a month since Google released the final stable version of Android 10 to Pixel smartphones, Some manufacturers like OnePlus have already rolled out an update for their current flagships. However, the largest part of smartphones in the market still is yet to receive the latest Android version. According to a report, Samsung is planning to release the One UI 2.0 beta based on Android 10 in the coming weeks.

The tech giant teased that the OneUI 2.0 beta is coming soon for the Galaxy S10 lineup in a post on its official community forum in South Korea. As expected, this initial phase of the beta program will be exclusive to the South Korean users. However, the firm should expand it to more regions and countries in the coming months. 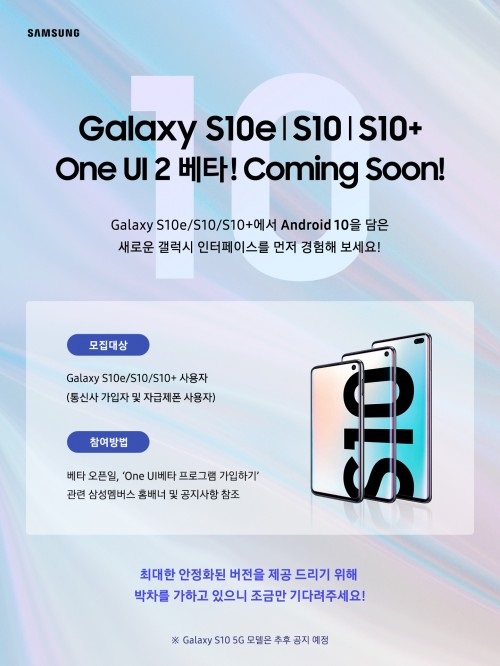 According to the post, the Galaxy S10e, Galaxy S10 and Galaxy S10+ will be the first to get the new firmware. Furthermore, the Galaxy S10 5G variant will join the Android 10 beta program later on. It’s curious to see that Samsung didn’t make any mention of the recently released Galaxy Note 10 series. Hopefully, we will have more news about their respective Android 10 updates in the future.

Those who want to test out the new One UI 2.0 will have to register through the Samsung Members app but as with past releases, there will be limited spots. Once enrolled you will receive an OTA update with the new firmware. Of course, Samsung enthusiasts who are out of the flagship segment may be wondering when the referred update will arrive for their handsets.

First, Samsung will update all its flagships, then it should start to deliver the One UI 2.0 update for devices under the A and M-series.

Motorola One Macro Specifications and Price

Samsung CEO Reveals Name Of The Next Foldable In A Secret Meeting, Not Galaxy Fold 2

CES 2020: Samsung’s Project Neon Is A Reality Of Artificial Humans