Halloween is almost upon us and is a time to celebrate the spooky. Google is as well not left out and it’s also in a mood for this season and it will be celebrating the season in a very weird way.

On its Seattle campus, is a cemetery of Google’s products that got shut down and it will make you feel sad as you reminisce these products. 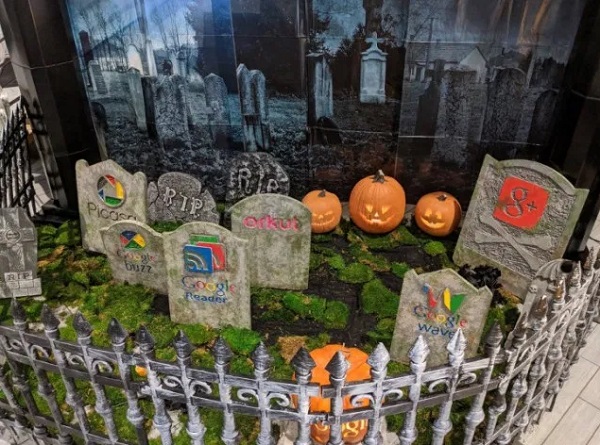 There has also been some sites that tracks which products Google has killed such a killedbygoogle.com. and Google Cemetry. Well, Google created an actual graveyard showcasing said products it has killed off including Google Picasa, Google Plus(with a noticeably large gravestone), Reader, Google Wave, Buzz and Orkut. Inbox by Gmail, Google Allo and Google’s other numerous messaging apps are sadly missing.

The only product that transitioned to something important was Picasa that survives as Google Photos. Google Play Music is also on the same track like other as app is being replace by YouTube Music as the default music app on new devices running Android 10.

Not sure whether spooky or just sad? pic.twitter.com/E8uvavkuQf

Advertisement
Join Us On Telegram
ALSO READ:  If You Type "the 1975. . com" in the Google Search App, You'll Get This
Advertisment

Upcoming Samsung Galaxy A90 To Have A Pop-up Selfie Camera