Xiaomi recently expanded its entry-level smartphones series with the Redmi 8 which followed the arrival of the trimmed version – Redmi 8A that is currently the most affordable Xiaomi phone aside the Redmi Go.

Redmi 8 and 8A are among the best options for people with a very low budget and want to spend at most, $110/N40,000 on a new phone. There is also another low-end smartphone released by Xiaomi, also available in the most affordable price range: the selfie-centric Redmi Y3.

Well, this article a comparison review which you offers a route to find out which of these Xiaomi entry-level phones has the highest value for money in its current 2019 line-up. Let us start with their specs comparison. 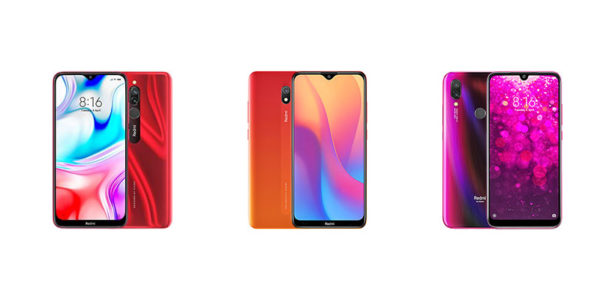 Despite Redmi 8, 8A and Y3 are purely low-end devices, Xiaomi invested a lot of effort in their aesthetics. The trio come with elegant design schemes as well as a splash resistant body.

Redmi 8 and Y3 have definitely the most impressive bodies in terms of look, due to their reflective backs. However, none of these devices is made of premium materials: all of them have a plastic body. Despite Redmi 8 boasts the more recent Aura Mirror design, Redmi Y3 remains a very elegant and minimalistic phone: given that they are both beautiful and well-built, choose by basing on your tastes. I personally prefer the Redmi Y3 due to its cleaner back and the U-shaped waterdrop notch.

We do not suggest you focus on the display quality as they all offer more or less the same thing. Note that Redmi 8A does not have a fingerprint scanner, while Redmi 8 and Redmi Y3 do (but it is not in-display).

Redmi Y3 wins the performance comparison because it is equipped with a better chipset: the Snapdragon 632 running at a max frequency of 1.8 GHz. It provides smoother and more stable performance thanks to more powerful custom cores, while the Snapdragon 439 found on Redmi 8 and 8A is less powerful but more efficient thanks to its 12 nm production process.

Between Redmi 8 and 8A, the former is better since it has a higher memory configuration with 4 GB of RAM and 64 GB of internal storage, but you obviously have to spend more for it. Android 9 Pie is out of the box on each of these devices, but Redmi 8 and 8A already come with MIUI 10 while Redmi Y3 is still based on MIUI 9.

The best rear camera setup belongs to the Redmi 8 which comes with a 12 MP dual camera boasting a bright f/1.8 aperture and a depth sensor. But if you want the best selfies, then Redmi Y3 is your choice as it is definitely one of the best affordable phones ever for taking selfies, thanks to its 32 MP front camera.

Redmi Y3 has a dual rear camera too, while Redmi 8A does not, that is why we would not recommend the Redmi 8A if you asked us about the best camera phone here.

Redmi 8 and 8A are equipped with bigger 5000 mAh batteries as well as very efficient SoCs, so they have a longer battery life than Redmi Y3. They even support a faster charging technology with a max power of 18W.

Overall, I would go for the Redmi Y3 due to the better front camera and the higher performance, but some may not have the same opinion since Redmi 8 and 8A offer a much bigger battery, as well as a better main camera sensor.

ALSO READ:  Infinix Zero 8 vs Infinix Note 7 - Which Would You Buy?