The Oukitel C17 Pro is a slim and shiny device that sports a 6.35-inch screen with a ratio of 19.5:9 and a resolution of 720×1560 pixels (HD+). The display is stretched edge-to-edge and has a tiny cutout for the selfie camera at the top-left. 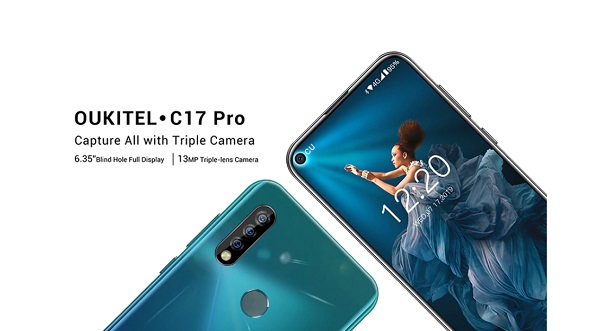 The handset is powered by the MediaTek Helio P23 — an octa-core processor capable of ticking at 2 GHz. We have 4 GB of RAM and 64 GB of storage space, which can be expanded via a microSD card of up to 128 GB.

As far as camera is concerned, it has a triple camera module on the back, features a 13 MP main sensor made by Sony, a 5 MP sensor with an ultra-wide lens, and a 2 MP assistant sensor for depth-sensing. Of course, we’ve got the popular bokeh camera mode as well as a pro manual mode on the Camera app.

Housed by a huge 3,900 mAh battery capacity; we’ve got a fingerprint scanner mounted on the back and face unlock via the phone’s front camera. The Oukitel C17 Pro comes with Android 9 Pie out of the box and no bloatware to deviate from the core experience.