Shenzhen Transsion holdings, the parent company of Tecno, Infinix Mobile and itel made its debut at the STAR Market (Nasdaq style board for tech stocks by Shanghai stock exchange) earlier today but just before its IPO, Huawei filed a lawsuit against the company in China.

Huawei has taken Transsion to a local court in Shenzhen China, where both these companies are based. The lawsuit is basically for reported IP theft and it concerns Transsion and five of its subsidiaries. The lawsuit is said to have been accepted by local court, so we expect to hear more on this case in the coming weeks.

Intellectual Property (IP) Rights are very important for any smartphone company. However, Transsion doesnâ€™t have a lot of patents under its belt. The company reportedly has just 630 patentsÂ and 286 computer software copyrights to its name in China, which is minuscule as compared to competitors like Huawei andÂ XiaomiÂ which have over 100,000 patents individually.

So how did Transsion become the largest smartphone vendor in China with such ridiculous number of patents?

The company basically established its dominance in Africa with extremely cheap smartphones that rely on old technologies likeÂ 2GÂ whose patents have expired. ItsÂ Tecno, itel, and Infinix brands all individually rank within the top 5 vendors in the African smartphone market. But as competitors like Xiaomi and Huawei areÂ expanding its presenceÂ in the African continent, IP rights are going to be very important for Transsion. Also, Africa is slowly modernizing with technologies like 3G andÂ 4G, which will force Transsion to improve its IPR position in the region. 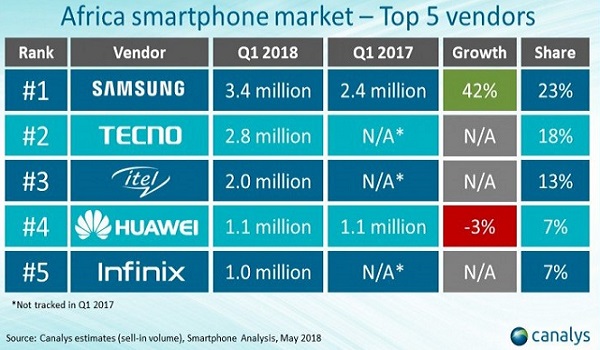 So a lawsuit from a giant like Huawei is not good at all for the company. However, this lawsuit hasnâ€™t affected the companyâ€™s IPO today. Transsionâ€™s shares opened at RMB 53 ($7.4) which was a strong 50.7% higher than the listing price of RMB 35.15 ($4.93) per share. The company is reportedly valued at around RMB 42.4 billion which comes to around $5.95 billion.

Samsung Is Working On A Smartphone With Spectrometer

Huawei begins production of 5G base stations without US components