With Windows Core OS, Microsoft has a single Windows 10 kernel that makes it easier to deploy updates for all device types tablets, PCs, and hybrid devices. Moreso on 2-in-1 type Surface, Microsoft is also working on new products, including a PC / tablet with two screens that could be formalized in October, not to mention that the company was working on a foldable smartphone whose project seems for the moment to have been paused.

Microsoft has announced changes in the interface of hybrid devices. The changes are presented in the changelog of the latest Windows 10 preview for Insiders (Build 18970).

The firm is rethinking the Windows 10 experience on tablets. It tests a new interface for convertibles when they are in tablet mode. The design offers an experience closer to desktop computer mode. Currently, when you detach the keyboard dock from Surface Pro, the user interface automatically switches to a version optimized for touch screens. The taskbar is removed and the Start menu items are presented in full screen in Modern UI tiles. 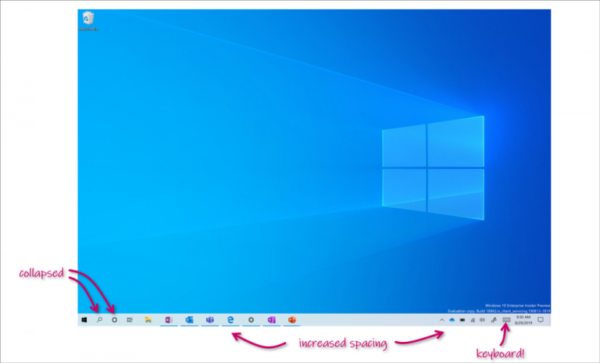 The new interface includes the taskbar and the Start menu while retaining some elements for touch screens. To maximize available space, the Windows search bar is reduced to a “magnifying glass” icon that deploys a text field when touched. The icon of Cortana is located right next to it as you can see in the image above. Microsoft is also announcing a new version of the file explorer optimized for touch screens.

Finally, the company is yet to removed the old version of the interface for tablets. Those who wish will still be able to activate it for an unchanged experience. But this is the new mode that will be proposed by default.

These changes are expected on the Windows 10 update of April 2020.