WhatsApp has been releasing alots of update lately even though the most anticipated feature â€˜dark modeâ€™, is still unavailable. Well, the Facebook-owned company has started rolling out the fingerprint lock feature to Android users.

The update is available for android users who have WhatsApp beta v2.19.221 installed running Android M and above with a device that supports Fingerprint ID authentication.

Once the Fingerprint Authentication is turned on, the widget content will be hidden by default. But users can still answer WhatsApp calls and reply to messages from notifications since the authentication of the fingerprint is only required when the user wants to open the app and access it.

How You Can Access Fingerprint iD for WhatsApp on Android 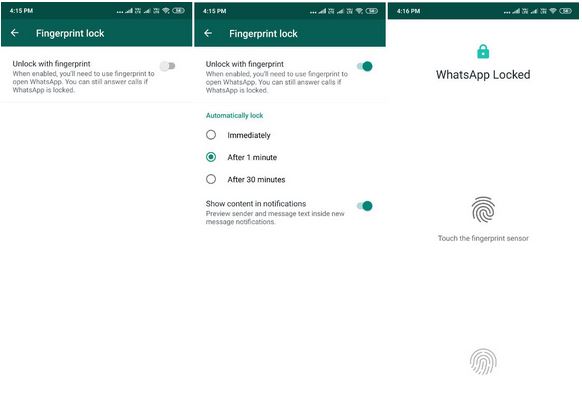 There are three options available for users to authenticate their identity; visible under â€˜Automatically lock and includes options like â€˜Immediatelyâ€™, â€˜After 1 minuteâ€™ and â€˜After 30 minutesâ€™.

The Fingerprint ID authentication feature is gradually rolling out to WhatsApp beta testers on Android and will soon roll out to all.

Kindly share your experience with it us once you get the new feature as a beta tester.