Tecno’s Pouvoir series of big battery phones was first announced in 2018. This year, 2019, the Pouvoir lineup of smartphones came in 3 models already â€“ Tecno Pouvoir 3, Tecno Pouvoir 3 Air, and Tecno Pouvoir 3 Plus. If you are not sure what the differences between the 3 devices are, here is a detailed breakdown to help you understand them.

The key thing to note is that all 3 smartphones are targeted at users who want a smartphone with a long-lasting battery â€“ which is why they all have big batteries. Each of these phones now differ in terms of screen size processor (you can liken the processor to the engine of a car), storage, cameras, and of course pricing.

Tecnoâ€™s L series used to be the lineup for big batteries, and had smartphones like Tecno L8,Â L8 Lite,Â L9 Plus. But the L-series has since been discontinued and it can be said that the Pouvoir series is its replacement.

And now, letâ€™s settle down and examine each of these big battery phones one by one to see what they offer and which suits you best.

Tecno Pouvoir 3 runs Android 8 Oreo, has a 6.2-inch display with a wide notch. It is powered by a Quad-core Mediatek MT6739 chipset clocked at 1.3GHz. For photography and video recording, it has a 13 MP selfie camera and a 13 MP rear camera.

Internal storage for your pictures, videos and other files is 32 GB. It has 2GB of RAM, which means that you will be able to launch and use just a few multiple apps at the same time smoothly. Battery capacity is 5000 mAh.

The Pouvoir 3 Air is an entry-level smartphone. This means it offers the barest minimum in terms of performance. The software on the inside is Android 9 Pie (Go Edition) and it has a 6â€³ display, which is slightly smaller than the Pouvoir 3.

On the inside is a Quad-core Mediatek 6580 chipset clocked at 1.3GHz and 16GB memory for your files. With just 1GB RAM, you will be able to run just 2 or 3 apps at the same time.

The selfie camera in front has an 8 MP lens, and the main camera at the back has an 8 MP lens as well. The Pouvoir 3 Air has a 5000 mAh battery, just like its big brother above.

This is the least powerful, least capable, and most affordable of the Pouvoir 3 devices. You can purchase one for about N29,000.

Finally we come to the Pouvoir 3 Plus. As the name suggests, it is the big brother of the family. It runs Android 9 Pie and has the biggest display of the lot â€“ a 6.35-inch screen with a waterdrop notch.

Under the hood is an Octa-core Helio P22 chipset clocked at 2.0GHz, which makes it more powerful than the other two Pourvoir 3 phones. 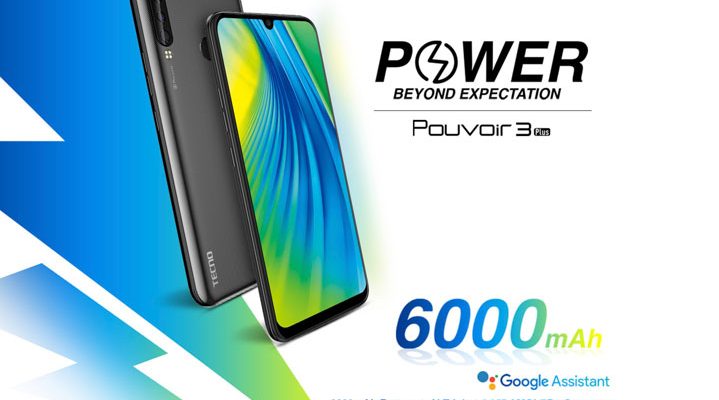 Photography lovers will be thrilled to hear that it has a triple camera (13 MP + 5 MP + 2 MP) at the back and an 8 MP selfie camera in front. There is ample space for storing your photos and videos. The Pouvoir 3 Plus has two memory options â€“ 32GB and 64GB, with 3GB and 4GB of RAM respectively. If you are a power user and tend to run many apps at the same time, the Pouvoir 3 Plus is what you want to buy.

Lastly, it has an even bigger battery than the other two â€“ a whopping 6000mAh in capacity.

Of course, all of these more capable, more advanced features mean that the Pouvoir 3 Plus is the costliest of these three big battery phones. The 3GB/32Gb vairant costs N46,000, while the 4GB/64GB variant sells for N50,000.

Here is a comparison table that spells out the key differences between these three Pouvoir 3 smartphones.

Hopefully, the above table puts the three big battery phones in proper perspective for you. What Tecno Mobile has done is offer a long-lasting battery experience at different price points, so that no matter your budget you can afford a 2019 Pouvoir phone.

All three Pouvoir 3 smartphones have a rear-mounted fingerprint reader and 4G LTE support. The minimum battery capacity in the lineup is 5000mAh. Unfortunately, none of them has fast charging, so there is no way to do quick top ups. But the good part is that with their massive batteries, all you have to do is charge any of them overnight and you can use them for anything from a full day to 3 days, depending on your usage pattern.

The 3 Big Battery Smartphones In Summary

In wrapping up, here is a quick summary of the profiles of these 2019 smartphones from Tecnoâ€™s Pouvoir series:

Whichever of them you can afford is fine as long as what you are after is the ability to use your phone for extended periods without needing to top it up. All of them offer long-lasting batteries that should see most smartphone users through 2 to 3 days of use.

Disclaimer: While we take the pains to ensure accuracy, we can not guarantee that the specs andÂ  information on this page are 100% correct. If you think that any information for the current phone is wrong or missing, pleaseÂ contact us.

Motorola One Action Specifications and Price