After making the Android 9 Pie update, in the form of One UI available for the old Galaxy J3 (2017), Samsung hasÂ decided toÂ extend the update to some of its devices from its tablet line. Today, the latest version of Android is rolling out for the Galaxy Tab S3 and Tab A (2017).

The new update brings all the goodies present in Android Pie and within Samsungâ€™s vision of Android experience. The update introduces OneUI which has been a great step forward for Samsung devices. Moreover, the update bumps up the Android security patch level on the Tab S3 to August 2019. However, the two-year-old Tab A (2017) is stuck in the June Security patch. 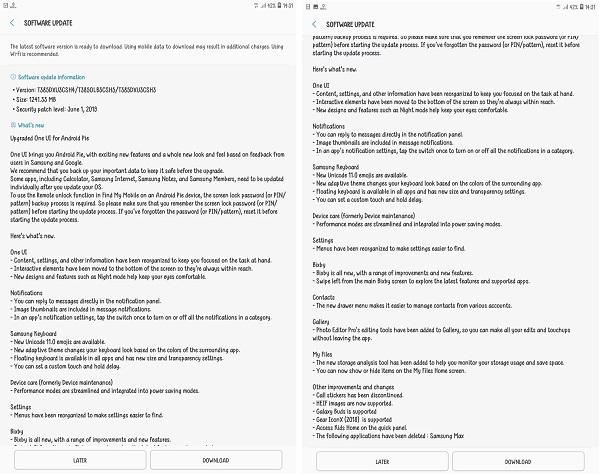 Who Can Get It?

It’s worth noting that this update is rolling out via OTA and may take several days to reach all eligible units. Worth noting that the update is rolling out for the LTE variant of the Galaxy Tab S3. It is available in the Philippines, Malaysia, and Vietnam. However, when it comes to Tab A (2017) its availability is limited to Malaysia. Itâ€™s unclear, but we do hope, to see Android Pie update spreading for more Tab A (2017) devices across the globe in the coming weeks.

You can find the latest firmware for the Galaxy Tab S3Â hereÂ and the Tab A (2017)Â here.

If you live in any of these regions, and canâ€™t wait for the OTA notification, you can always try to force check the update via the Settings >> Software update menu.

Android Q Is Android 10, Confirmed By Google As It Dropped Dessert-Based Names