Redmi officials have been endlessly expressing their excitement with their upcoming Note 8 Pro smartphone as they can’t stop teasing it. After Lu Weibing, Redmi brand manager, teased the quality of the 64 MP camera, more details about the hardware and performance emerged.

The full renders of the Redmi Note 8 Pro are now official today. Now, we did have a good idea of the design (rear) earlier but this is the full dress down.

The Hail Green version is seen here with the 64MP camera, and three other sensors. There’s also some image of the Fritillaria White colour circulating the interwebs but those are not official. Those images also reveal the front design to be a teardrop notch with slim bezels at the bottom.

Some Confirmed Specs and Features Of Redmi Note 8 Pro

Redmi has confirmed many features of the upcoming Note 8 Pro in two days with a torrent of teasers. A 4,500mAh battery is confirmed, gaming accessories are confirmed, the Helio G90T processor is confirmed, and most of all, the 64MP sensor with 25X Zoom and twice the resolution of 8K.

It will also come with some sort of liquid cooling, as confirmed by the latest teasers. According to the official posters, the liquid cooling will manage to lower the temperature up to 6 degrees Celsius, which would be handy for those long gaming sessions. 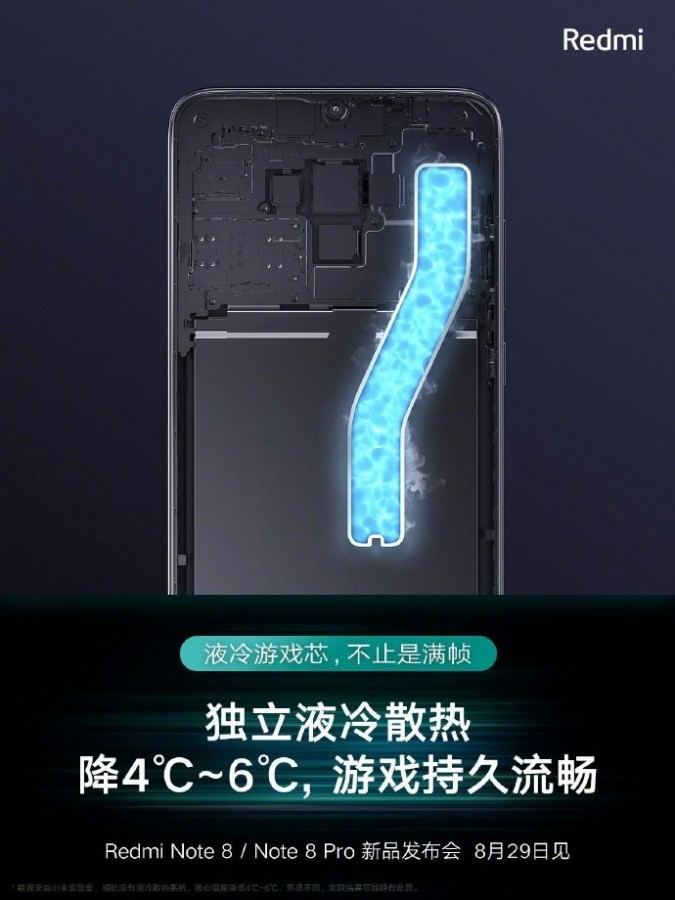 Also, we’re expecting 18W fast charging, with in-box fast charger this time. Liquid cooling was also teased today and this will probably be the first time Xiaomi will be introducing the feature to its Note series.

The Redmi Note 8 series will be announced on August 29, and the company started gathering reservations a week ahead of the launch, which was yesterday. Within 24 hours, over a million people subscribed to learn when the phone will be on the market, meaning it could easily smash the sales record of its predecessor, Redmi Note 7.

The three phones of the current Note lineup sold 20 million units in seven months, so the Note 8 will have some big shoes to fill.