The new Redmi flagship is on the way. But this time, the company focus less on endurance, rather moving towards making a camera-centric device. Redmi has developed its own 64MP camera sensor on the base of the Samsung GW1 CMOS. This simply means that the new Redmi Note 8 comes, it will be the first phone in the globe with such a resolution camera. 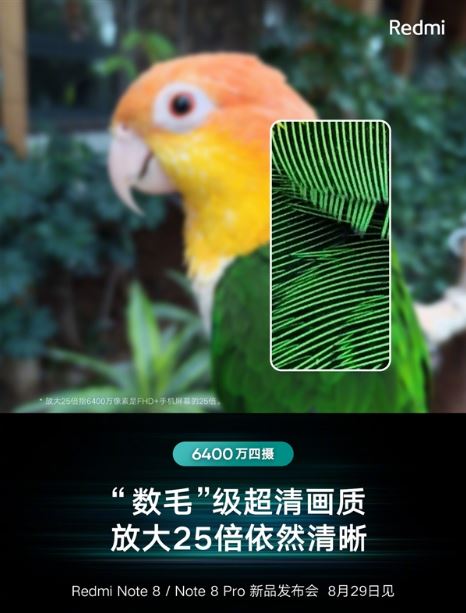 The poster laid emphasis on the fact that the Redmi Note 8 series has a â€˜luxuryâ€™-level imaging experience and a â€˜hair- levelâ€™ ultra-clear image quality. As we can see, even after 25x zooming, the details are clearly seen.

This ultra-high resolution is nearly 2 times that of 8K resolution and 17 times that of 2K resolution. And the 64MP photosensitive area is as high as 1/1.7-inch, 34% higher than that of the 48MP CMOS. This camera is also combined with four-in-one 1.6Î¼m large pixels mode. So the night shooting ability is more outstanding.

MediaTek announced the G90 series SoCs back in July and there were rumours that a Redmi device will come with the G90T chipset in the near future. Now, a Weibo post by MediaTek revealed that the upcoming Redmi Note models will in fact ship with the new SoC. 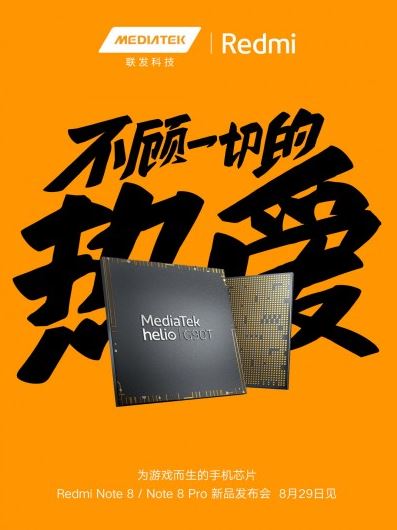 In terms of core configuration, the Redmi Note 8 series is the first to come with theÂ MediaTek Helio G90TÂ chip. The chip uses a dual-core Cortex A76 architecture, the GPU is the Mali-G76, and the graphics frequency reaches 800MHz.

Well, it’s just a matter of time for the Redmi Note 8 to be launched on August 29.