Google is currently testing Play Pass. It is a monthly subscription that will have users access hundreds of premium apps and games on its app store for $4.99, a figure that will probably change when this feature officially rolls out.

Play Pass will unlock hundreds of paid apps (including premium music apps), games â€“ with no ads, download fees and in-app purchases. The subscription service will offer a 10-day trial too. 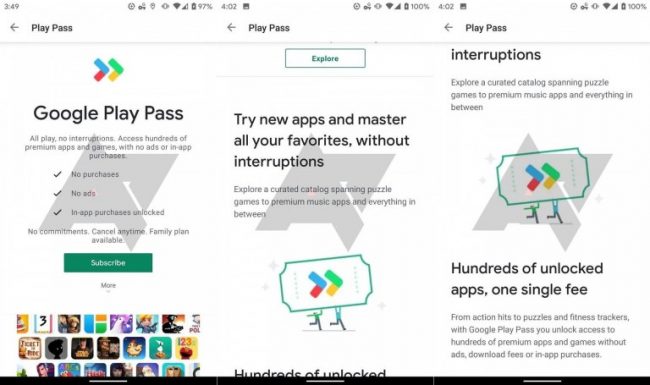 According to screenshots fromÂ Android Police, vanes like Pinball and Stardew Valley (normally cost $7.99) that are included in the catalog of the apps and games that will be covered by Play Pass.

ALSO READ:Â How To Pay For Google Play Store Apps With 9Pay

The Google Play Store will have an â€œExplore Google Play Passâ€ section where curated apps will be showcased and feature a fast forward icon in four the Google Play colours. Apps and games will be promoted by Store listing and will also spot a purple banner underneath the buy button to let you know that itâ€™s part of the Play Pass program. 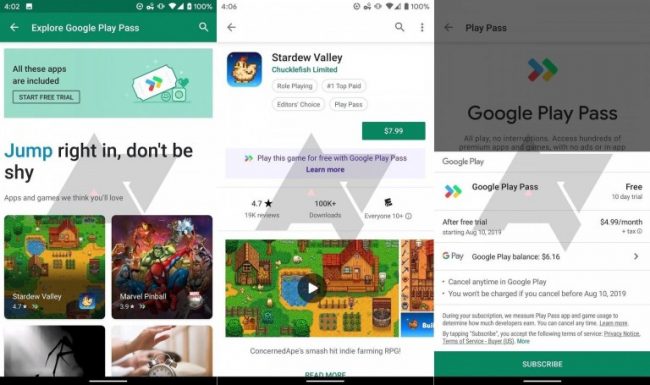 This new development joins other changes the Play Store is rolling out such as the introduction of playable game demos and launch of Google Play Points program in Japan.

Play Pass was first spotted byÂ XDA-DevelopersÂ in late June but the confirmation by Android Police concludes that Google is definitely working on a paid subscription service that will presumably roll out later this year.

Apple had early this year announced its own version calledÂ Apple ArcadeÂ at their annualÂ WWDC that lets users pay a monthly fee to unlock a library of mobile games on its iOS devices. Apple is yet to officially launch this program too. Google has already confirmed this.

It is worth noting is that iOS users spend more on paid apps and games than Android users and itâ€™ll be interesting to see how this new Google subscription service plays out in the long run.

Alphabet, Google’s Parent Company Is Beats Apple To Become The Richest In The Company

Updated: All The Android Operating System From Version 1.0 Till Date