Samsung continues with the revival of its Galaxy A series and they have really gained extreme popularity across the world because of their superb bang for buck ratio – great screens, great battery life, good design, decent cameras. And according to this latest leak, the next year’s Galaxy A phones will come with at least three cameras and some will even have four.

The roadmap below, as shared by Sudhanshu Ambhore, revealed every Galaxy A phone scheduled for 2020 release and its camera configuration. There will be no less than 8 phones and 7 different main cameras – ranging from 13MP to 108MP. Much like this year the ultrawide snappers will be a defining feature of the Galaxy A phones. 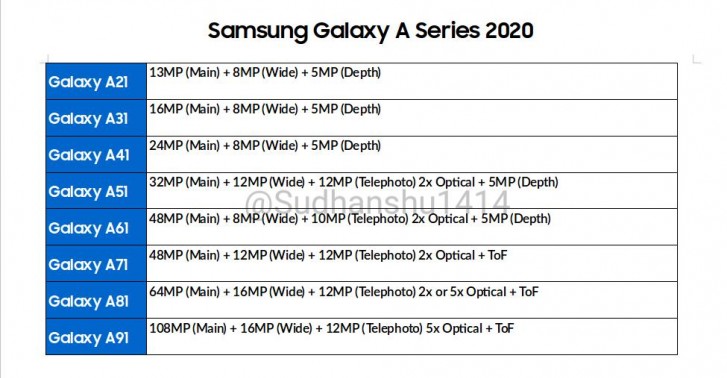 The Galaxy A81 and Galaxy A91 will also have Samsung’s new ISOCELL sensors – 64MP that will output 16MP snaps and the 108MP that promises 27MP images.

Here are some key camera specs of Samsung Galaxy A series of 2020. pic.twitter.com/c7YifHcNUX