While we wait for the Galaxy Note10 to be available, you might want to check out Samsung’s latest phone, Samsung Galaxy A80. Launched on Monday, it features three cameras at the back and three at the front, but not at the same time.

The triple-lens camera on the Galaxy A80 faces backward for standard photos. But when you need selfies, the camera module slides up and rotates to the front. It’s an incredibly odd solution.

The phone’s biggest selling point has to be its flip camera. The Galaxy A80 uses a combination of a slider and Oppo-style flip camera to create a rather unique mechanism.

The Galaxy A80 flip camera mechanism packs a 48MP main shooter, 8MP ultra-wide camera, and a 3D ToF sensor. These shooters also serve as your selfie cameras thanks to the flip setup, of course.

Looking at the A80 features, it has a large-screen display that features only a tiny bezel on the bottom. That’s a 6.7-inch Super AMOLED “New Infinity” display with Full HD resolution and a built-in fingerprint sensor. 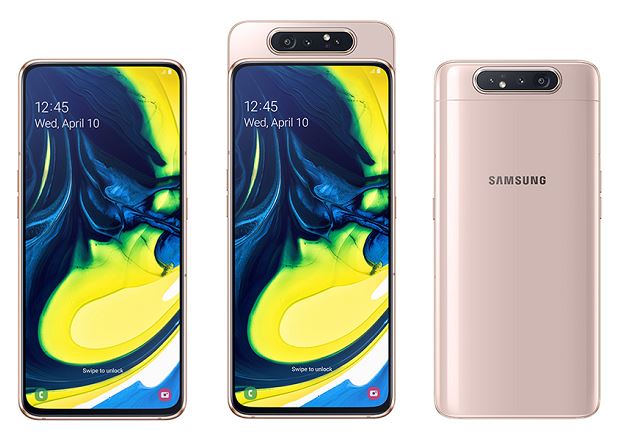 The new phone does however lack a microSD card slot and a 3.5mm port, which have been two Samsung fixtures over the years.

The price hasn’t been revealed yet by Samsung but it could cost roughly around USD $780.

Key Specifications of Galaxy A80

Join Us On Telegram
ALSO READ:  Future Samsung A-series Phones To Be Powered By Exynos 9630
Advertisment