Tecno Extends Its Partnership Deal With Manchester City For Years

Tecno Mobile held its 2019 Global Partner Summit in Delhi, India a couple of days ago using the opportunity as well to unveil its new Phantom smartphone, the Phantom 9.

Having launched the smartphone in Nigeria last week, the OEM which has expanded its global presence to over more than 60 emerging markets across Africa, South Asia, Southeast Asia, Middle East, Europe and the South America also used the Global Partner Summit to announce it has extended its partnership with Premier League Champions, Manchester City.

In 2016, TECNO showed its intent to become a global when it shocked everyone to announce itself as the Official Global Tablet and Handset Partner of Manchester City.

The deal has been beneficial with TECNO using the club to grow its strategic marketing and advertising campaigns globally. In what has been a successful partnership with the Premier League giant, City legend, Paul Dickov was present at the Summit in Delhi to seal the renewal and also announce a new health and fitness challenge, calledÂ TECNO Race to Manchester City,Â where 40,000 City Indian fans will virtually race across the world to Manchester. 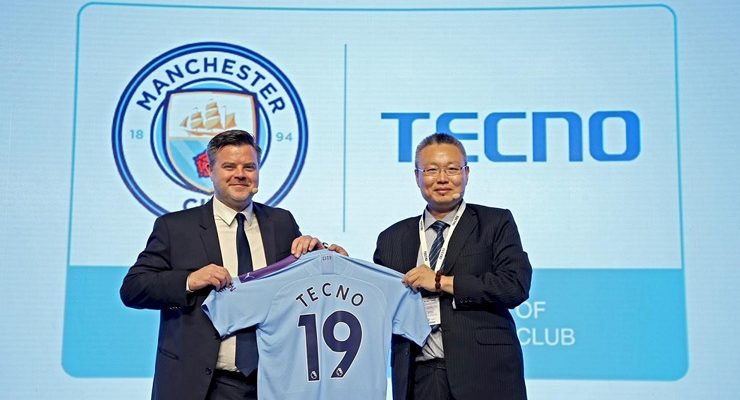 Speaking at the Summit, Damian Willoughby, Senior Vice President at City Football Group said, â€œManchester City prides itself on partnering with ambitious, pioneering and creative organisations, so we are thrilled to be announcing the extension and expansion of our highly successful partnership with TECNO Mobile. During the past three years, we have collaborated on a number of exciting initiatives that has engaged, connected and entertained our global fanbase, particularly in India and supported the impressive growth of the TECNO business and brand.â€

He further stated, â€œTECNO have consistently demonstrated their love of football, creating some unique experiences for fans and this is evidenced with more than 40,000 people signing up to the TECNO Race to Manchester City. This country-specific initiative is a fantastic example of two partners working together and weâ€™re delighted to be continuing this successful partnership.â€

Having also changed its official slogan to â€˜Expect Moreâ€™ a campaign will be launched in collaboration with Manchester City which will deliver an engaging fan-led content on social media including football-themed photography competition and will continue to be the presenting partner of the â€˜Shot of the Gameâ€™ series shared on Cityâ€™s social media pages which connects fans with the most memorable moments on a match day.

Vice President ofÂ Transsion Holdings,Â Stephen Ha further expanded more on the partnership with Manchester City, he said, â€œThe partnership with Manchester City Football Club, the Premier League champions, will help further boost our brand recognition and name value as a leading mobile device company around the world. With a history of business relationships in elite sport, TECNO is delighted to partner with City, a club who we feel shares similar values.â€

Transsionâ€™s presence continues to enjoy great reception especially in Africa, thanks to the continual growth of its three smartphone brands, TECNO, Infinix and itel in the smartphone market share in Nigeria in Q1 2019.

WhatsApp Is Working On A Quick Media Editing Feature, To Be Release Soon