TheÂ  will be launched next month on 7th and it has passed through Geekbench. The phablet sports model number SM-970F and is powered by an Exynos 9825 SoC mated to 8GB RAM. 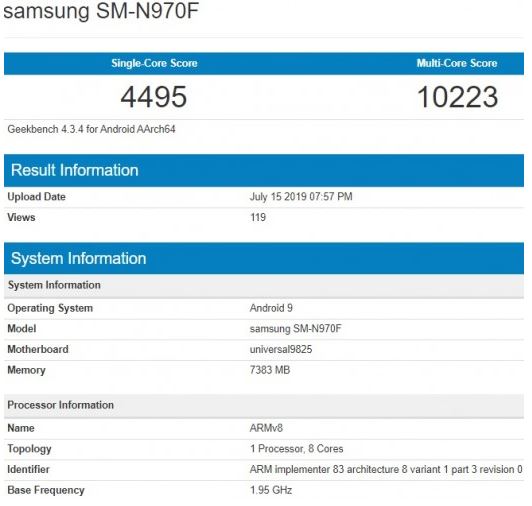 This isn’t the first time the Note10 has paid a visit to Geekbench, though. Last month, it appeared on the benchmark database bearing model number SM-N976B with the same chipset and RAM amount.

However, SM-970F has scored better than SM-N976B in the Geekbench tests, suggesting that software development has made a lot of progress since.

There’s also a Snapdragon 855-powered variant of the Note10, carrying model number SM-N976V with 12GB RAM, which scored less than the SM-N970F in Geekbench’s single-core test but got higher points in the multi-core test.

Samsung will launch three phones under the Note series this year- Note10,Â Note10+, and a 5G version. The Note10 and Note10+ have similar designs, but the Plus variant has a larger screen, a ToF unit at the back and probably a bigger battery as well.