The K20 series has already gained pedigree of being one of the company’s best seller, and now, the Redmi K20 Pro Avengers Limited edition has arrived. The Xiaomi sub-brand unveiled the device earlier as a tribute to Marvel’s heroes mostly with acoustic changes. The special edition device drops the gradient finish on the back for a black-colored back. 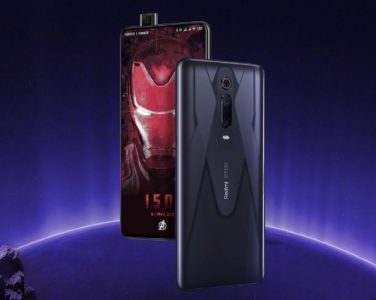 As per the rear finish, the back panel is styled after Iron Man’s suit coupled with a marching Avenger background. The device is packed in a special package stuffed with the usual special editions paraphernalia.

The box itself has the Avengers logo and inside is an Avengers-themed back as well as a small metal plate with Avengers 4 engraved on it.

Other than the cosmetic changes, the Redmi K20 Pro Avengers Limited edition shares the same specs with the K20 Pro. The K20 Pro parades a 6.39-inch Full HD+ AMOLED display with 91.9% screen-to-body ratio with the  Snapdragon 855 beneath. It gets 8GB of RAM, and on the camera front is triple camera (48MP+13MP+8MP)  rear cameras, and A 20mp selfie cam.

The whole package is fueled by 4000mAh battery and runs Android 9 out of the box. Redmi has yet to reveal the Redmi K20 Pro Avengers Limited edition pricing and roll of date soon. The Redmi K20 series will be taking a trip outside of China soon. Though the Avenger version is likely to be a China exclusive.

Advertisement
Join Us On Telegram
ALSO READ:  Xiaomi Mi Max 2 Specification and Price. A phone that keeps you alive for 2 days
Advertisment