Realme 3i Specifications, Features and Price

Realme has just unveiled its latest addition to its portfolio dubbed Realme 3i, the companyâ€™s latest smartphone in the Realme 3 series.

The Realme 3i, as you could guess, is a version of the Realme 3 that was launched earlier this year. The Realme 3i brings a lot of the same features and specs as the Realme 3, but at a lower price point. It slots right in between the entry-level Realme C2 and the Realme 3.

The Realme 3i comes with a Dewdrop display and a diamond-cut design on the back much like the Realme C2. Under the hood, the phone packs a Helio P60 chipset and a large battery capacity.

The Realme 3i aims to offer a power-packed set of features at a budget price point. Here’s a quick look at some of the key specs and features of the Realme 3i.

The Realme 3i offers a familiar Dewdrop display that we have seen previously on the Realme C2, Realme 3 and Realme 3 Pro. The rear panel also gets a diamond-cut texture on a matt-like finish which is again similar to the Realme C2. The main difference is that the Realme 3i gets a rear-mounted fingerprint sensor, while the Realme C2 does not. It also comes in a unique new Diamond Red gradient colour option.

Powering the Realme 3i is a MediaTek Helio P60 chipset, which has powered phones like the Realme 1 in the past. It is an octa-core processor that is known to deliver a smooth performance for day-to-day operations while offering good power efficiency. In comparison, the Realme 3 gets a newer Helio P70 SoC. 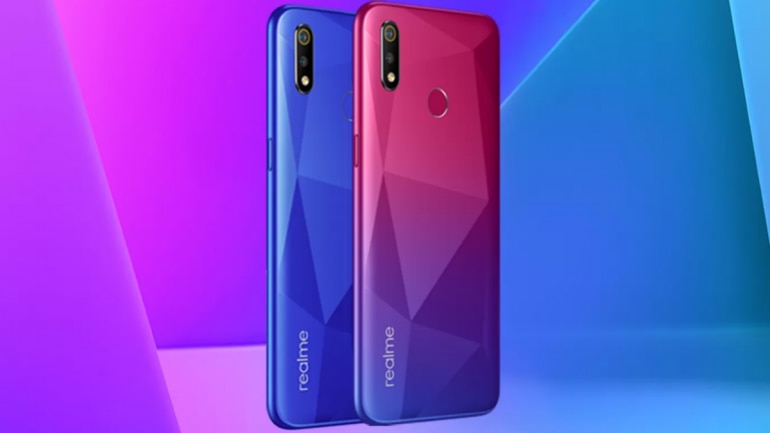 The Realme 3i also highlights a large 4,230mAh battery like the Realme 3. This should enable the phone to offer over a full day battery life on a single charge when combined with a power efficient Helio P60 chipset and some smart battery saving features on ColorOS 6.

The smartphone also ships with ColorOS 6 based on Android Pie out of the box. ColorOS 6 brings a number of new features such as an app drawer, gesture-based navigation and new gradient theme for the UI, among other things.

Realme 3i Price and Market Availability

The Realme 3i will come in Diamond Blue, Red and Black colors and is scheduled to go on sale in India starting July 23 exclusively on Flipkart.