The Redmi Note 7 and Note 7 Pro will actually get this beta update in Q1 2020 while the others will be tested in Q4 2019. MIUI official said that the above is the model information that has already been adopted or will be adapted to Android Q.

The test time is only an estimated time. If there is any change in the outsourcing test time of the relevant model, it will be updated and notified, so stay tuned (if Google Android Q plans have changed, we will adjust accordingly). 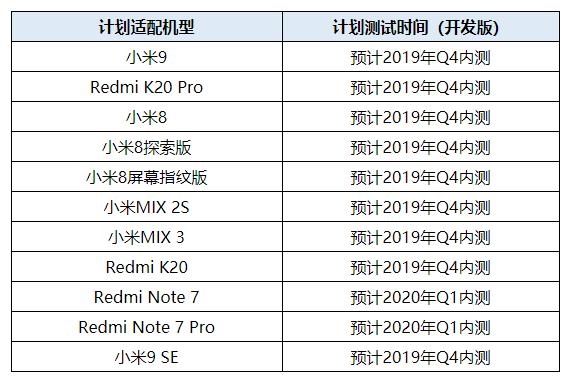 It should be noted that after all models in this announcement are released for the beta version of Android Q, the development version of the beta will be delayed for at least half a year. According to Xiaomi, adaptation work for other models is still under commissioning and scheduling. For more adaptation plans, please pay attention to the follow-up Xiaomi forum announcements. As more devices are added, we will also make it known to you.

ZTE nubia wants You To Wrap This Smartphone On Your Wrist