Flagship Samsung Tablet Appeared On GeekBench. Could Be The Tab S5

South Korean manufacturing giant, Samsung, is preparing a flagship tablet which recently appeared on Geekbench. This tablet with model number â€œSM-T865â€ has aÂ single-core score of 3506 points while the multi-core hit 9788 points.

According to reports, this flagship tablet is equipped with the Snapdragon 855 processor, 6GB of RAM and Android 9 Pie. The minimum frequency for this chip is 1.78 GHz but there are reports that it gets as high as 2.84 GHz and its performance is improved by 45%. 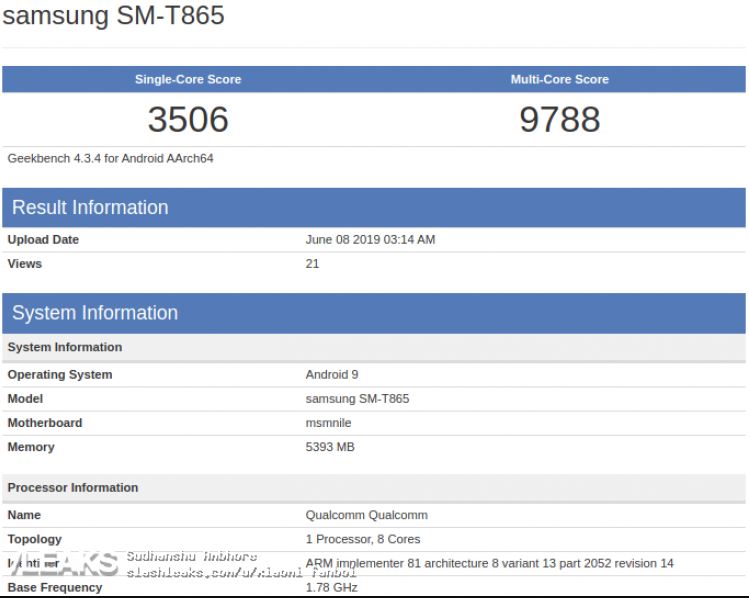 The Samsung Tab S4 currently on sale is equipped with the Snapdragon 835 processor, 2K Super AMOLED screen, 4GB of RAM, and the price is 4888 yuan ($707). This new tablet with Snapdragon 855+6GB RAM will definitely not be cheap.

In other reports, some renders of theÂ Samsung Galaxy Note10 Pro recently appeared on Onleaks. Most notable from these renders is that it comes with a punch-hole front camera which is located at the center of the phone. This is the first phone to use a front-facing center punch-hole camera. Besides this, the general design of this smartphone is similar to the Galaxy Note10.

Nokia Allegedly Working On Two 5G Smartphones, To Be Announced in Q3