Here are some of the impressive new additions to the Apple Watch with watchOS 6:

The Apple watch now gets support for its very own App Store which will let users download their favorite apps directly on the watch. Users will be able to search for apps using dictation, scribbles, or via Siri; plus, you’ll be able to see product pages and more before you download the app.

Apple is also bringing more Apple Apps to the watch, including things like the Audibooks app, Voice memos, and even the calculator app along with support for calculating tips, and splitting bills with your friends.

The Apple watch will now be able to use streaming apps without the need for an iPhone, so you’ll be able to listen to your favorite podcasts and audiobooks on your watch independently, without having to rely on your iPhone. 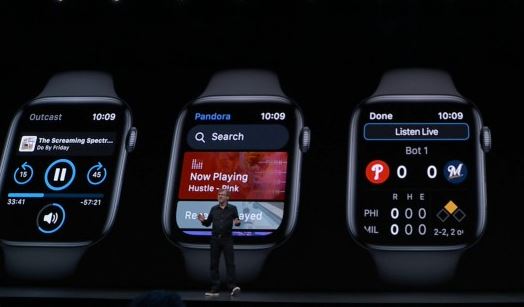 There’s a lot more coming in watchOS 6, and we’ll keep you updated, so check back often.

ALSO READ:  Palm Is Coming Back To Smartphone Making With A 3.3" Android phone

Apple TVs are getting updated this Fall with a new tvOS, of course, and that is tvOS 13. It introduces a few but important updates.

First, there is a brand new homescreen with live previews and better organization, which is very welcome.

Multi-user support is finally coming with tvOS 13 as well. It will work independently within Apple Music. Oh, and Apple Music is also getting a synced lyrics!

Gaming will be changed on tvOS as well. The devices running tvOS 13 will have native support for the Xbox One and PlayStation 4 controllers and they can connect easily any of those.

Finally, Apple will be bringing its video streaming service later this year and it has already released a trailer for its first show – For All Mankind – coming from Ronald Moor – the man behind Battlestar Galactica and quite a few Star Trek TV shows.

A Redmi Phone Will Come With A 64MP Camera Sensor. Specs...