Whether you are trying to checkout the performance of your smartphone or simply want to confirm the hardware configuration, there are apps on the Google Play Store that can bail you out by getting all the necessary info you need.

Even if you are not specifically looking for a problem, itâ€™s always a good practice to run a couple of tests and ensure everything is working as intended. Well, if you are looking for such applications, there are a few that will help you test and explore your phoneâ€™s hardware in the most simplified yet definitive manner. Here are the 5 best apps that can help you test hardware on Android.

Top Apps to Test Hardware on Android in 2019

Phone Tester, as its name suggests, is aÂ fairly simple appÂ that lets you check out yourÂ phoneâ€™s hardware and see if everything is working as intended. The app has a very simple and easy to use interface. If you just want to test some of the basic things on your device without getting confused in all the technical stuff then this one is for you. Even a 7-year-old kid can easily use this app, thatâ€™s how simplified it is. 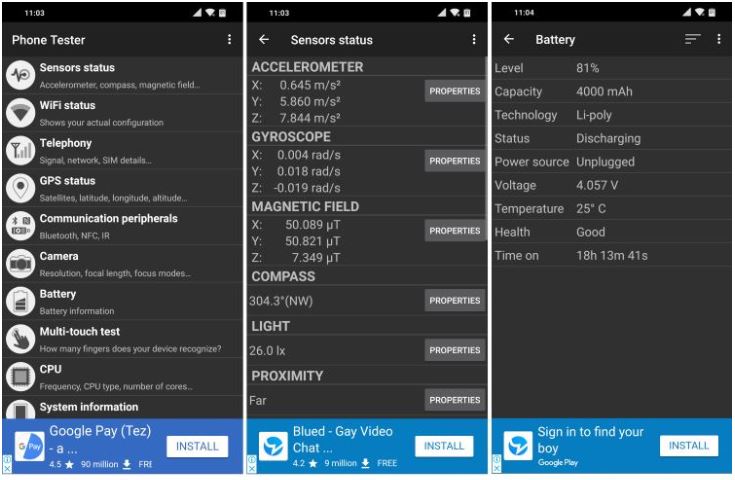 As soon as you open the app, youâ€™ll see various options ranging fromÂ Sensors tests to GPS Status.Â Tapping on the options not only reveals the relevant hardware info, but youâ€™ll also be able to see if itâ€™s working properly.Â You can test theÂ sensors, WiFi, a telephone signal, GPS status, battery, multi-touch, system information,Â etc. It is worth pointing out that youâ€™ll have to give necessary permissions to the app.

The free version of the app is cluttered withÂ ads. Itâ€™s not necessarily a deal breaker considering the fact that you wonâ€™t be using this app every single day. However, if you are not willing to put up with ads, then thereâ€™s an option to get rid of them by purchasing a premium version of Phone Tester. This is one of the best apps to test hardware on Android and you will not regret buying the app.

Phone Doctor PlusÂ by iDea Mobile Tech Inc. is yet another hardware testing app for Android that will give you an idea of your phoneâ€™s overall health. Itâ€™sÂ loaded with featuresÂ and it deserves a place in any list that mentions phone hardware testers.Â ItÂ offers 25 different testsÂ and each works as good as any. The main screen will show youÂ an overview of the testsÂ completed under various heads likeÂ Outer Hardware, Sensors, Inner Hardware, and Wireless, and also the battery, storage, CPU and network information. 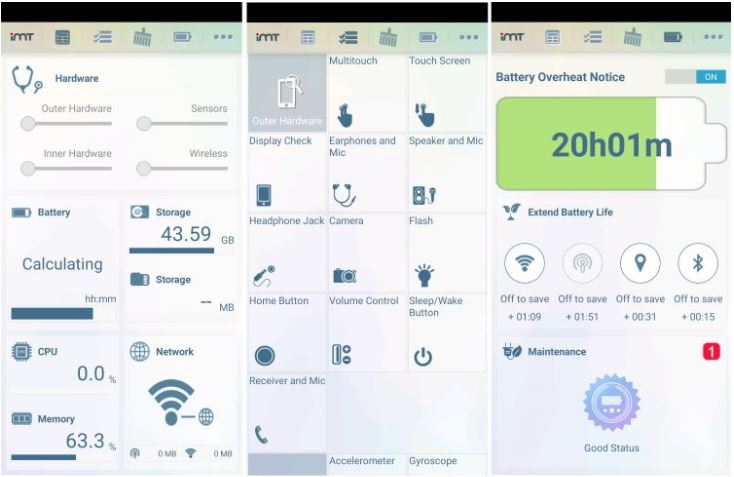 We recommend you use this app if you want an easy-to-use app to do a through test of hardware of your Android device. Also, unlike Phone Tester app, the Phone Doctor Plus does not have any ads. So, be sure to check it out. 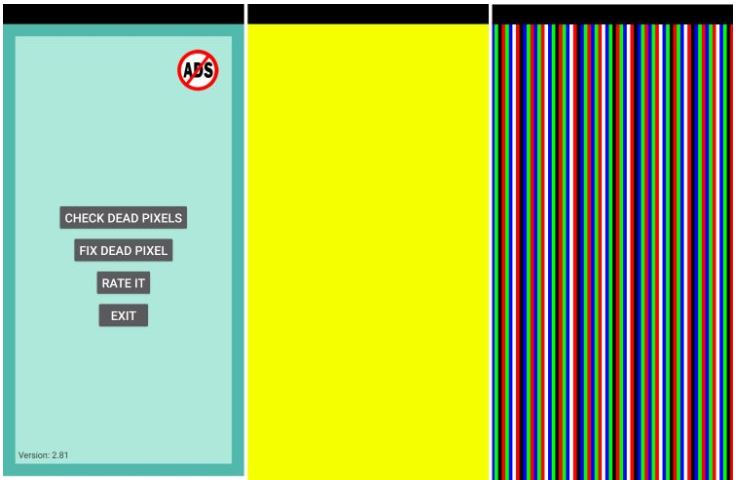 Dead Pixels Test and Fix app run a series of scans on your phoneâ€™s display to identify dead pixels. After identifying them, the dead pixels that can beÂ brought back to life by refreshing them enough timesÂ through their three optionsÂ (red, green, and blue). The app attemptsÂ to repair partial sub-pixel defects, stuck sub-pixels, dead pixels, dark and bright dot defects, and more.

Yes, the process takes quite a bit to finish, but the results are pretty promising. Some stuck pixels that are caused due to hardware defects, however, canâ€™t be fixed by any apps, and youâ€™ll have to get the display replaced in such cases. If you are looking for an app that can test the display hardware on Android, this is the app to get. 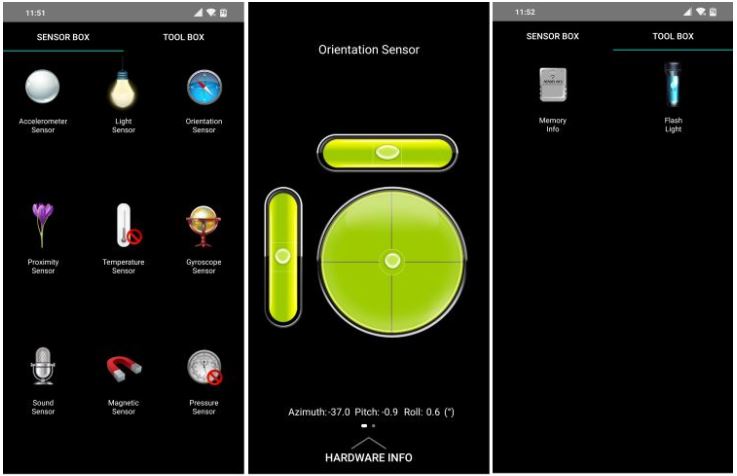 Apart from the sensor tests, however, Sensor Box doesnâ€™t offer much. Thereâ€™s a separate tab calledÂ Tool BoxÂ that lets youÂ check your memory info and test the flashlight.Â Yes, itâ€™s not a lot, but given the fact thatÂ it is a dedicated app for sensors, this one deserved a place on our list.

With overÂ 1 million downloads on the Google Play Store, AccuBattery is a simple app thatÂ monitors and optimizes battery health and its performance. This is one of the must-have apps if you are using an old smartphone and its battery has started degrading. 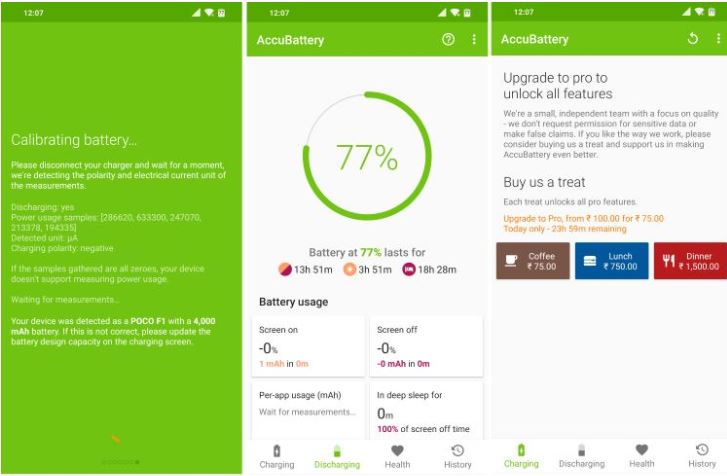 AccuBattery performs a series ofÂ battery health checksÂ in an attempt to figure out the health of your battery. It shows some useful information such as theÂ current battery capacityÂ and lets you compare it with the intended capacity thereby allowing you to measure theÂ level of wear.Â AccuBattery also shows some other useful info likeÂ discharge speed, consumption per app, and more.

Thereâ€™s also aÂ Pro versionÂ of AccuBattery, and it adds some useful info such asÂ Dark mode, detailed battery statistics,Â historical sessions, and more. It also removes ads from the app, so you might want to take a look at the Pro version as well.

Apps To Check out Hardware Info

If you are not interested in running any fancy tests and are justÂ looking for an app to check out the hardware info, then weâ€™ve got some apps for that as well.Â These apps are not meant to test hardware on Android, rather they are used for extracting your deviceâ€™s information on system, battery, CPU etc. There are a number of apps that promise to do so. Here are some of our favorites: 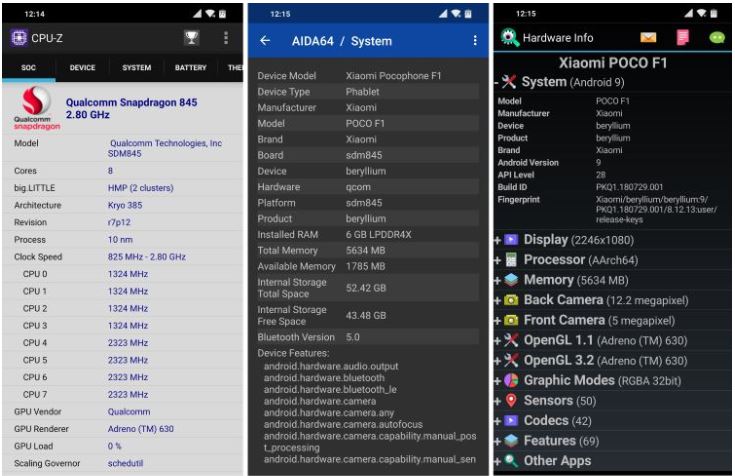 Which Apps Do You Use to Test Hardware on Android?

Well, those were some of the apps that you can useÂ the next time you need to test hardware on Android. You can also use these apps if you feel like your phone is behaving out of the ordinary.Â Most of the functions in each app should work easily on any android device, but some advanced tests like temperature, gravity, pressure etc. may not work due to inadequate hardware support.

Some with us some of your favorite apps for testing the hardware of your device. Weâ€™d love to check them out and hopefully add them to the list as well.

Can We Find 150 Mbps Internet speed in Nigeria?

These are Samsung’s improvements to the Galaxy Fold