There are something you in 2019 and you almost get dumbfounded at the absurd nature of the statements. One of them is the statement by popular pastor, John Suleman of Omega Fire Ministries International, that reading the Bible from a phone â€“ or any other mobile device â€“ in church shows lack of respect to God.

You know why it sounds very odd? the Bible didnâ€™t even start out as a printed book.

The bible was originally a collection of hand-written parchments and scrolls. It wasnâ€™t originally a book. And those parchments were painstakingly scripted by â€œholyâ€ men who had separated themselves from the world. The scripts themselves were considered holy.

But technological advancement showed up. The invention of the printing press was technological innovation in its time, and the bible eventually took that form.Â Digital technology is the innovation of our time. And so the bible has taken on this form too â€“ an app on our mobile devices. 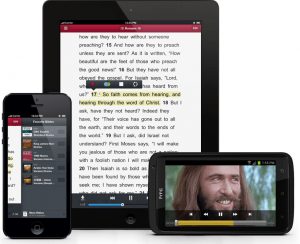 While Pastor John Suleman knocks his members for reading the Bible from a mobile device in church, his fellow pastors and preachers are actually teaching and preaching from one on the pulpit. Irreverent too?

I never thought I would ever hear a preacher say something as darned as this in 2019. Because you know, some pastors have been preaching from their smartphones as far back as 2008. And their church members were encouraged to use their phones instead of carrying around a physical bible.

For example, OliveTree Bible Reader was already available forÂ Palm OS handhelds, Pocket PCs, as well as Symbian and Windows Mobile smartphones in 2008. This is OliveTree app on a Pocket PC from that era:

I know because I remember that I was reading the Bible from a phone in church using OliveTree Bible Reader app on my Symbian phonesÂ  back then. As a matter of fact,Â The first version of OliveTree was released in 1998 for Palm OS.

This is 21 years down the road and we are still on this matter?Â This is one apostle that needs to get out of the dark ages.

Reverence is of the heart and reflects in your attitude. You either have it in there or you do not. It has nothing to do with whether you carry a physical Bible or an e-Bible.Â Reading the Bible from a phone or tablet in Church is as reverent as reading a physical Bible if you have an upright heart.

Wait oh! Am I preaching? husshhh!

Oh; and this story is not hearsay, by the way. Watch the video and hear the â€œdivineâ€ instructions yourself:

It is one of the funniest things I have heard this year of our Lord 2019.

Here are a few punch lines from John Suleman:

â€œGod sees the end from the beginning. He knew there would technology before He said, â€˜This book of the lawâ€™.â€

Jokes. They almost sound like rap lines from a hit track. But letâ€™s keep the same logic and look at a few other things.

The Bible does not say to drive or fly either, but the good pastor has no problem with those. God knew there would be technological advancement but mentioned only donkeys and horses in the Bible.

The early Church met in homes and contains no instructions about church meetings outside of homes. The Bible says nothing about church buildings, though God knew the end from the beginning. But those arenâ€™t issues to him. Suddenly, reading the Bible from a phone in church is a problem.

As someone has said, this sounds more like an attempt to retain control, similar to how the Church in the dark ages was heavy-handed and sought to keep people from accessing the bible through the technology of the day.

But I really do not care how his members and followers respond to this sermon of his.Â My only interest in the matter is the digital technology aspect, and I find it intensely amusing.

The Church also once persecuted and killed people for owning and reading the printed Bible, but look where we are today â€“ a pastor is insisting that it is only the printed Bible is valid in church meetings. Jokes.

Reading the bible from a phone in church will become even more widespread. It will gain ground till the next disruptive technology arrives. There is absolutely nothing that John Suleman or anyone else can do about it. Not even the Pope can halt the advancement of digital technology.

Is this the point where someone shows up to say. â€œTouch not mine anointed?â€ The only things I have touched this morning in the typing of this article are my smartphone and laptop.

Electronic Appliances That May Be Phased Out In the Nearest…