Foldable smartphones is now the order of the day. With Samsung moving away from just concept, we are now sure that some other manufacturers will be following suit in the next few days. Huawei, Xiaomi and some other lesser known Chinese firm have already confirmed their readiness to unveil their first foldable devices. 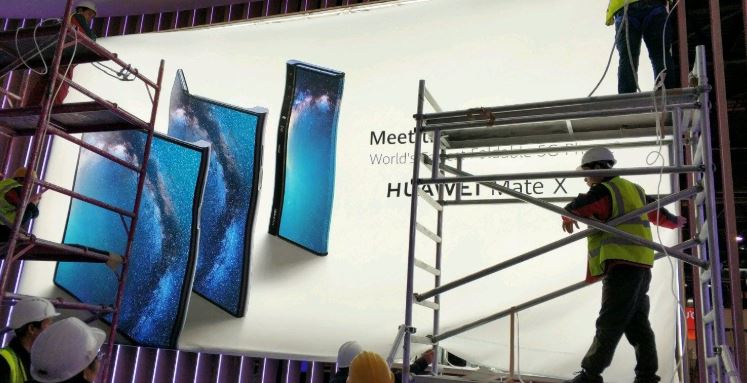 Huawei has said it’s not going to present its flagship P30 at the upcoming MWC in Barcelona, but has plans to unveil a foldable smartphone at the event and has in the past few days consistently teased us with the device. Now, just a few hours until it is expected to take the wrap off its foldable smartphone, a promotional poster of the device has surfaced revealing some all important information.

While we did not know the exact name of Samsung foldable phone until it was presented on stage, a leaked poster first spotted by Twitter user reveals that the foldable phone from Huawei will be named the Huawei Mate X.

Unlike the Galaxy Fold that unfolds like a book to assume a larger tablet-like screen, the poster shows that the Huawei Mate X folds its flexible screen outward, so it can expand its single display from being the size of a small dual-screen smartphone to one thatâ€™s the size of a tablet. So we are looking at a Huawei Mate X with just a single larger screen that folds into two usable screen â€“ one on both sides when in the phone mode.

While this concept looks more impressive than the Galaxy Folds approach with a discrete phone screen, Huawei approach means the foldable screen will remain unprotected when set down.

Other than the design, the poster also reveals that the Huawei is touting the Mate X asÂ â€œthe worldâ€™s fastest foldable 5G phone,â€ Other details of the Huawei Mate X remain to be revealed, but we are told it will pack multiple cameras similar to the Galaxy Fold.