Nokia is going to hold a press event at this year’s MWC where it is expected to announce a latest flagship device, theÂ Nokia 9 PureView. Recently, a supposed official render emanated fromÂ 91MobilesÂ which offers a good look at the handset’s hardware.

Of course, the first thing youâ€™ll notice are those thick upper and lower bezels. Many phone manufacturers are already thinking of doing away with thick bezels and it seems that Nokia could be at a disadvantage in the eyes of other consumers. This design is more representative of 2017 than 2019. 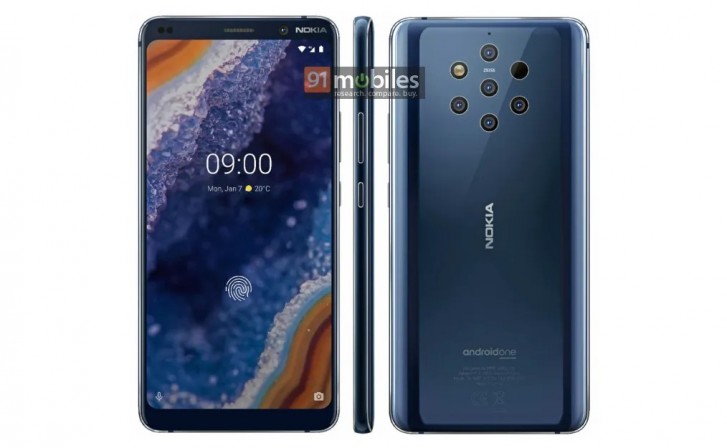 However, where the Nokia 9 could be ahead of all its competitors with its five-camera system on the rear. There are seven cut-outs arranged in a circular fashion which include five cameras, one LED flash module, and one reserved for auxiliary camera sensors like perhaps a laser-assist focus or white balance meter. The camera is branded with Nokiaâ€™s imaging partner: Zeiss. If Nokia can successfully pull off a really powerful camera, the display wouldnâ€™t matter at that point.

The power key and volume buttons located at the right edge of the phoneâ€™s frame, but we also do see anÂ in-display fingerprint scannerÂ for authentication. Above the display are Nokia branding, a selfie camera, earpiece, and two other essential smartphone sensors (light and proximity) towards the left.

The Nokia 9 PureView is expected to be announced during the MWC on aÂ February 24 eventÂ and it rumored to come with last yearâ€™s Snapdragon 845 CPU. Itâ€™s also believed that Nokia might release an updatedÂ 5G-compatible versionÂ of the phone with perhaps the Snapdragon 855. Meanwhile, thereâ€™s a 5.99-inch display with QHD+ resolution, a 4,150 mAh battery, and 8GB of RAM.