February 2019 Nigerian Presidential Elections: Who wants an Internet shutdown and its implications

By TellForce Blog On Feb 3, 2019
Share
Join Us On Telegram

As theÂ 2019 Nigerian Presidential Elections holding this February gets closer, there’s been a lot speculations flying that it’s likely the internet will be shutdown. And now, we have someone publicly pushing for its reality.

In recent times a number of African governments have resorted to shutting down the internet in their countries during periods of key political activities. It happened during Maliâ€™sÂ August 2018 elections. There was also anÂ internet blackout in Congo DRÂ while awaiting presidential election result.

There have been media reports that the Office of the National Security Adviser to the president is working with the Independent National Electoral Commission (INEC) to have Internet Service Providers in the country shut down Internet access during the elections.

It is understandable that some look on the present government of the Federal Republic of Nigeria with lack of trust. The current government has been heavy-handed in handling a number of human rights issues and have been critical of social media.

But the ONSA has responded to dismiss the reports as disinformation and says that it is committed to protecting citizensâ€™ rights to access information and to communicate via digital means during the elections.

Who Are Those Advocating For Internet Shutdown?

But a new twist sprung up earlier yesterday when a popular social media personality published a series of tweets pushing reasons why an internet shutdown during the elections would be a welcome idea. Have a look:

If this is not done, there will be chaos as fake results are bound to be brandished by bothÂ @OfficialAPCNgÂ andÂ @OfficialPDPNig, causing chaos.

For me, it’s unbelievable that someone will come out publicly to advocate for such, but it has happened. Aye Dee recommends that the internet in Nigeria should be shut down for 24 hours on the 16th of February, 2019.

What is his reason? To prevent circulation of fake results around the country, and thus prevent trouble.

But he wasnâ€™t done. Aye Dee arguesÂ thatÂ access to the Internet is not a right for Nigerians. As such, INEC should shut it down if the need arises. 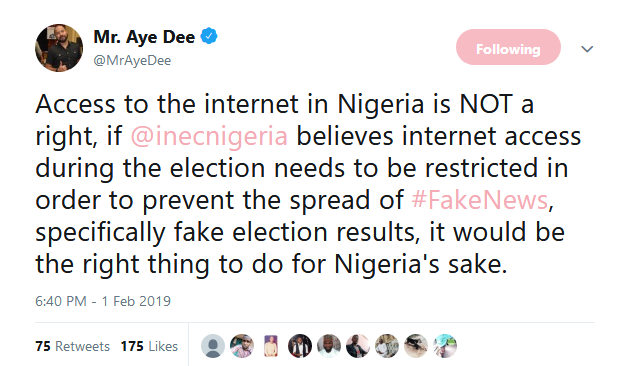 I am not quite conversant with the relevant laws of the Federal republic of Nigeria, but the country is a member of the United Nations, whoseÂ Human Rights Council released aÂ non-binding resolutionÂ condemning intentional disruption of internet access by governments in 2016.

Of course, some countries opposed the resolution then. Those countries includeÂ Russia, China, Saudi Arabia, South Africa, and India. And being non-binding, it is not law, and so individual governments can turn a blind eye to it.

The Nigerian government has ignored binding UN resolutions in the past. It would be nothing for them to ignore this non-binding resolution.

What Are The Implications Of A Internet Blackout?

Shutting down internet in a country of over 90 million internet subscriptions comes with huge implications. Even if it’s just for a day, the economic impact will be huge. A new generation of Nigerians are thriving in business, thanks to the Internet.

This is not 1984, when the country had no Internet presence and did not conduct any significant business with the outside world. Today, millions of legitimate international transactions happen between residents of Nigeria and the rest of the world.

Even on a weekend, a shutdown will be hugely disruptive, and the loss of business severe. It will be a black day for ISPs and network operators themselves, who would lose revenue in millions of dollars should it happen.

There is also no guarantee that an Internet shutdown during the 2019 Nigerian presidential elections will stop fake news from spreading. What is to prevent peddlers of fake results from still pushing them out after 11.59pm on Saturday?

And what is to say that young Nigerians who are already frustrated on all sides will not take to the streets in protest should there be a blackout?

An Internet blackout in Nigeria at this time is such a bad idea in so many ways that no-one should be advocating for it to happen.

What Can You Do If There’s Internet Shut Down?

If a shutdown does happen in Nigeria, what can you do? You can take preemptive steps to not be left stranded should a blackout happen. If you want to be a boy scout, here are a few tools you can get now to help you bypass censorship.

What of tools like VPNs and Tor? If government gets ISPs to turn off the Internet, those will be of no use. They are effective for circumventing blocked websites and services, and depend on a connection being present.

Finally, you can act by speaking out firmly against the idea of an internet shutdown during theÂ 2019 Nigerian Presidential Elections. Your voice has power, and even the most repressive governments in the world have eventually bowed to the power of the people they serve.

A Snapdragon 855-powered Redmi flagship is about to be born

How To Download A Single WhatsApp Sticker From Pack