Will Apple End Up Like BlackBerry If It Continues This Way?

By Andre Falana On Jan 15, 2019
Share
Join Us On Telegram
Related Posts

Is Apple toeing the steps of Blackberry? A couple of weeks ago, it was reported that Apple lost about $57 billion and since then, reports has not really been favourable for its fans. We just hope Apple’s downfall is not about to emerge and won’t end up like BlackBerry if they donâ€™t start being innovative.
Apple enjoys the position it has currently based on the fact that in 2006 when the first iPhone was launched there wasnâ€™t any strong competitor and also due to the fact they have total control over their operating system something Google plans to have with the release of Fuschia OS.

Starting from the iPhone 7 to the the currentÂ iPhone XS MaxÂ , Apple has not added anything substantial to their devices apart from removing the headphone jack and adding a notch. All Apple does isÂ change the processor and flip the cameras.

Itâ€™s one thing to recycle designs and features and a totally different thing to make them exorbitant. Make a quick Google search to compare the cost of upgrading from an iPhone X to an iPhone XS Max considering the only difference is that the devices.

Apple iPhones Are No Longer For Consumers

Apple has stopped developing phones for the users, all they are after is the money. Even Tim Cook confessed at some point last year that they were slowing older iPhones down. They want to force iOS users to upgrade so they can make more money.

I get the fact that every brand is out to make money but donâ€™t force your users to do something they donâ€™t want to and still extort them on top.

Why do users have to buy the fast charging cable differently, buy the Airpods differently and also buy the wireless charger differently?

By the time you calculate how much users have to spend to get the most out of their device, you can use it to get a very good laptop, a brand new Android Phone and a smart watch coupled with a wireless headset.

Iâ€™ll be honest, Apple truly has added a lot in the world of mobile technology as we know it but they are really running out of ideas and if they refuse to start innovating. Blackberry felt nobody could oust them from the mobile scene and we all know where that got them. Nokia too.

If you look closely, you can see how Apple shipments dropped in the second quarter of 2018. 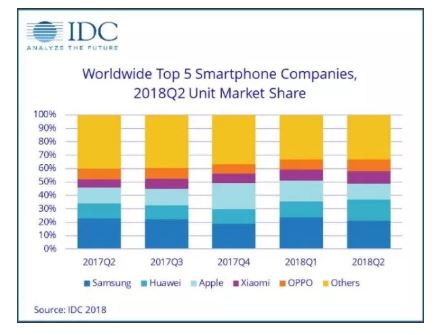 You canâ€™t even say Apple has the best camera in the world right now. The Google Pixel 3 and Huawei Mate 20 Pro has even pushed it further down the chart.

I know some people might say that the pricing is because Apple is a Premium company so they have to make premium products. Vertu was a premium brand too before they went off the grid completely.

I feel everything is moving too fast and Apple canâ€™t seem to keep up anymore. Also with their court case with Qualcomm, Apple is even looking toÂ partner with MediatekÂ to be able to add 5G to their devices

With devices like the Xiaomi Redmi Note 7 coming with mind blowing specifications for just $150 (N60,000) and flagship devices from Huawei, Oppo and Vivo coming at a lesser price than the Apple devices, Apple should definitely sit up or theyâ€™ll lose out on the mobile sector they have dominated for so long.

I know a couple of people might say Iâ€™m an Android Fan thatâ€™s why Iâ€™m saying all of this but trust me I have nothing against Apple. This post was even written from an Apple Macbook.

All Iâ€™m trying to say is Apple should make the upgrade worth the price, if they canâ€™t they can chose to release phones once in two years , at least none of us would complain about their camera flipping antics.

I know many Nigerian iPhone users probably wonâ€™t mind if Apple keeps extorting them because most of them only buy it to convince themselves they have some sort of class. Some of them donâ€™t even know what Airdrop does or that they can text another iPhone user on iMessage and some others play music via Xender and Opera Mini.