Samsung will be unveiling some of its new devices at anÂ Unpacked eventÂ in San Francisco on February 20. The devices to be launched includes the Samsung Galaxy S10+ with four cameras on the back and two on the front in a punch hole on the Infinity-O display.

Though, it’s more than a month from now to the official launch, the S10+Â has already appeared in a live photo. The rumour mills appears to correct as there will be two selfie cameras, tucked in the upper right corner, while bezels look like they are getting even thinner than theÂ Galaxy S9+.

The poster confirmed that the phone is the Galaxy S10+ with a flip cover, but the user removed the watermark on the screen with the employee ID and the device SN. The picture was likely taken on the bus from/to the Suwon campus where Samsung Electronics’s key facilities are. The device is still in its pre-production case that is used to hide the design until the very last moment.

The phone is said to be lighter than aÂ Galaxy Note9, despite being the same size. The hole on the top is not noticable at all, although he couldnâ€™t properly try gaming or video watching due to the watermark across the screen, therefore he can’t share any thoughts on that issue. 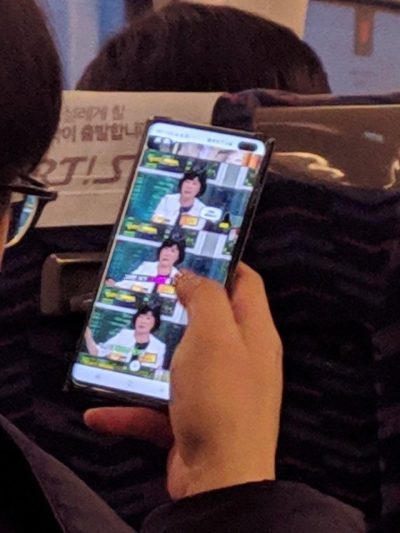 There is a fingerprint scanner under the display, but aside from these two technologies, the differences from last year’s flagship arenâ€™t huge.

Having a camera cutout in the upper right corner is a different approach than the Galaxy A8s and the Honor View 20. This means all status bar icons will go slightly to the left, but there is still room for the clock, notifications, Bluetooth, Silent mode, Wi-Fi, network bars, battery percentage, along with the icon.

What is Fuchsia OS? Difference Between Fuchsia and Android?