Samsung Galaxy S10 Lite Will Be Powered By Snapdragon 855 – Geekbench

The Samsung Galaxy S10 Lite may command a simpler camera setup and a smaller flat screen compared to its more premium siblings, but it will still be powered by the same processor as others. The Geekbench database already has the results from the SM-G970U â€“ the US version of the S10 Lite.

The device is powered by the Snapdragon 855 chipset (code named â€œNileâ€) which is paired with a 6GB of RAM. That matches the 6GB we saw on the Galaxy S10+ (Exynos) when it went throughÂ AnTuTu, but obviously there could be several memory tiers.

The benchmark score looks pretty low, below what the S845 scores. Well, that could be taken for granted now since this is a pre-release unit with non-final software. The phone will run Android 9 Pie out of box. 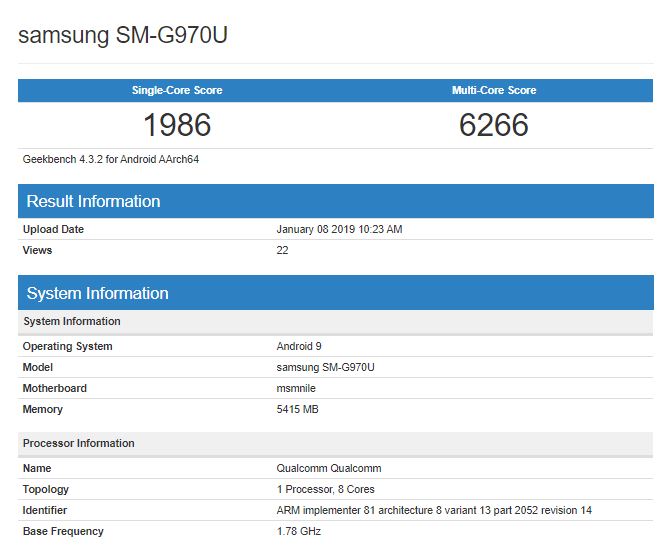 The Galaxy S10 phones â€“ a trio of 4G phones plus maybe a 5G model â€“ will be unveiled on February 20 at a special unpacked event and should be available in early March.

As for what kind of performance you should expect from a Snapdragon 855, early indications show that it should beÂ fasterÂ than the Kirin 980 and Apple A12 Bionic. Of course, there will be an Exynos 9820 version of the Galaxy S10 Lite as well.