The much anticipated Samsung foldable smartphone finally made its debut at the ongoing CES 2019. Samsung showed off the prototype of the smartphone to some of its private clients which include phone carriers-those who may choose to carry the gadget or not- behind closed doors. One of the executives of the selected carrier has this to say. 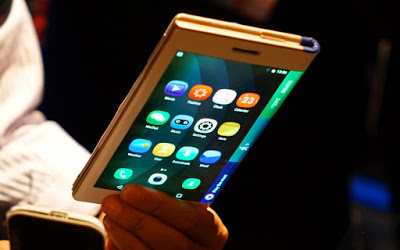 â€œWhen unfolded, Samsungâ€™s foldable phone does not show any crease indicating it had been bent. However, completely folding the device will lead to a breakage. For this reason, Samsung is testing out the device so that the sides remain slightly lifted when folded. The prototype seen today leaves a crease mark when being folded, but this issue will be fixed in the finalized versionâ€, the executive said.

Also, another of the executive describes the foldable smartphone as “specialized for multitasking” and â€œhighly useful for people who own both a smartphone and tabletâ€.

Although this is not the first time we will have reports that a prototype of the Samsung foldable smartphone is on display, in 2014 it was reported that Samsung also showed off a foldable smartphone at the CES 2014 but there was no product or news to show for it afterwards.

At the CES, which is the world’s gathering place for those who thrive on the business of consumer technologies, you can expect to see various manufacturers display their current and future consumer technology products.

However, we have to wait till later this year to have the official confirmation of the smartphone from Samsung. You can expect other major smartphone manufacturers to follow suit.