AÂ OnePlus 7 leaked photoÂ shows the yet-to-be-announced phone side-by-side aÂ OnePlus 6T, and there is not a notch in sight. So, where is the selfie camera? Keep calm and letâ€™s take a closer look.

If this leaked photo is anything to go by, unlike the OnePlus 6 and 6T before it, the OnePlus 7 design does not have a notch display. About time too. May the spirit of the notch blow away with 2018.

Looking at the leaked photo though, there is no punch hole for the selfie camera. But what is that jutting out slightly from the top of the phone? Have a look:

It’s not yet clear what that is, but there are chances that it could be a vertical sliding mechanism for the selfie camera. Or it could be some other new gimmick. Whatever it is, we eagerly await the unveiling â€“ or other leaked photos that show us clearly what it is and how it works. 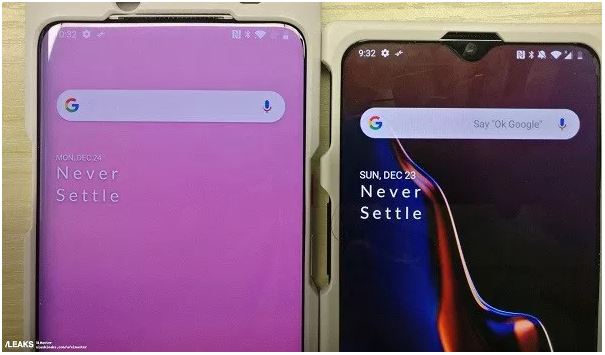 The OnePlus 7 design looks rather sleek though with very thin bezels and curved edge display.

What do you think of the OnePlus 7 leaked photo? And are you a OnePlus fan looking to get your hands on this model when it hits the stores later in the year?