Econetâ€™s founder, Strive Masiyiwa has confirmed that his company, Econet Wireless had been ordered to suspend Internet services in the country to their consumers.Â Econet is currently Zimbabweâ€™s largest telecommunications company with over 51% market share as of March 2018.

A screenshot shared on Twitter showed Strive passing along a statement made by his company on Facebook.

Strive Masiyiwa confirms they were ordered to block the internet by Gov #Zimbabwe ðŸ¤” pic.twitter.com/FZagaaKZXX

Here is a section of the release:

Further to a written warrant issued by the Minister of State in the Office of the President and Cabinet, through the director General of the Presidentâ€™s Dept. responsible for National security acting in terms of Section 6 of the Interception of Communications Act, Internet Services and related applications such as WhatsApp, Twitter etc are currently suspended across all telecommunications networks and Internet Service Providers.

As an organization, we are obliged to act when directedÂ  to do so in terms of the law.

All inconvenience caused as a result of this action is sincerely regretted. We urge others to respect that this is a matter beyond our control.

Failure to comply would result in 3 years imprisonment for members of local management in terms of section 6:3 (b)

The most interesting thing is that the post shared on Twitter is no longer available onÂ Strive Masiyiwaâ€™s Facebook page, which is odd. However, he had given a previous statement 18 hours ago as a comment in one of this posts confirming the Internet ban. 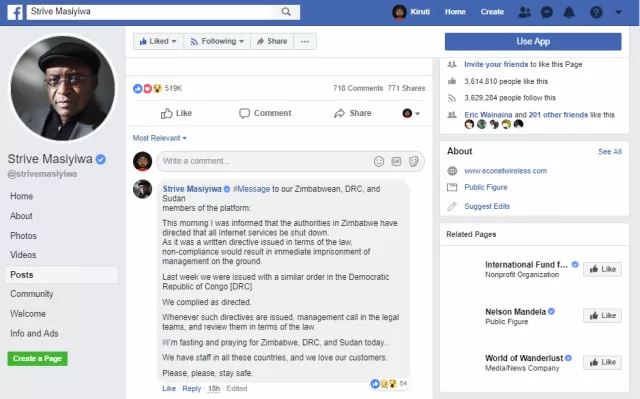 The directive to block access to the Internet can be related toÂ the demonstrations currently happening in Zimbabwe due to the massive fuel hikes. The move by the government to shut down the Internet looks like an attempt to ensure that Zimbabweans on the ground will not get a chance to broadcast their cries to the world.

How to Download Movies, TV Shows, Music, Games Torrents on Mobile and PC

Samsung Galaxy A50 Will Have A Version With 6GB RAM – Geekbench

Zimbabwe Govt Bans All Cryptocurrency Activities In The…