Who says it’s easy to be a social media manager, especially for a big brand like Samsung? Though, making mistakes once in a while could be pardonable, if you are lucky but a major one such as advertising a brand in a rival’s dress could be calamitous.

ALSO READ: Patent Revealed That Samsung Is Working On A Foldable Tablet

This has been happening around the world, especially with smartphone brands, has been the use of iPhones to manage other brand’s social media accounts.

We have seen such happen before, even with celebrities but this time around, the knife cut closer home. Renowned tech YouTuber, Marques Brownlee (MKBHD) spotted a tweet from Samsung Nigeria that was promoting the Galaxy Note9’s infinity display but the twist was that the tweet was posted from an iPhone; “Enjoy stunning cinematic experience on the Galaxy Note9’s SuperAMOLED, infinity display…” read Samsung Mobile NG’s tweet.

Following this “expose”, Samsung Nigeria did the noble thing and deleted – not the tweet, but the whole verified account. A surprising move indeed, as this hasn’t been seen yet. We get it, that these “via Twitter for iPhone” mishaps are embarrassing but simply deleting the tweet would have been good enough rather than taking down the whole account with close to 300k followers. 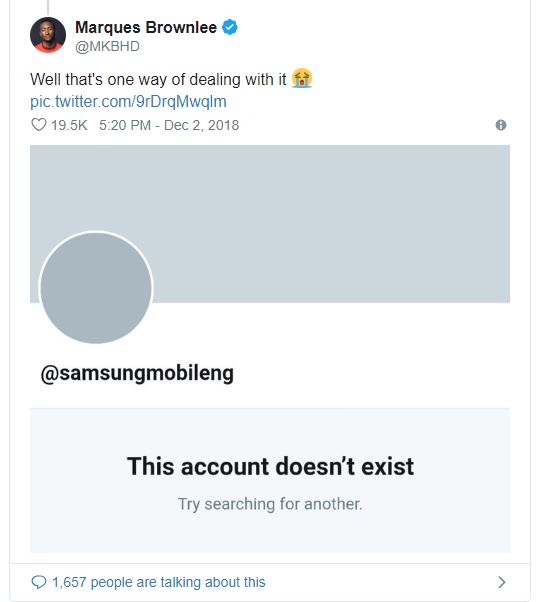 Deleting the account did not stop tweets from making fun of the matter, if anything, it made the whole affair funnier. Even more interesting is that an analysis of their Twitter account shows that this is not the first time an iPhone has been used to promote Samsung content.

Android 12 Upgrade Will Be Easier: Update Will Be Available On Google Play Store