MediaTek Announces Helio P70 – A Faster Variant Of The P60

What will the current world be without AI? I canâ€™t imagine. MediaTek is stepping up its AI-centric P60 chipset with the announcement of a new more polished platform. The Helio P70 will get a 10-30% boost in terms of AI tasks and a 13% improvement on general tasks. This actually implies that we are going to get just minor upgrade over the P60.

The new chipset is built on the same 12nm process, but it runs both its CPU and its GPU at higher clock speeds. As far as the processor is concerned, the four big cores, Cortex-A73, now run at 2.1GHz. Meanwhile, the Mali-G72 MP3 GPU is now clocked at 900MHz. Thereâ€™s a table below with more details. 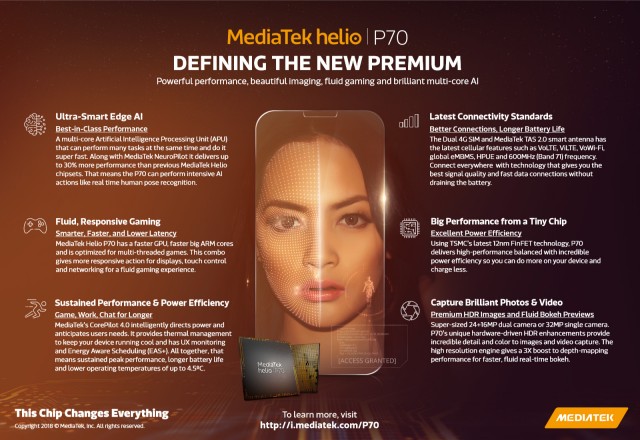 The Helio P70 is said to use up to 35% less power in popular games compared to the P60, despite the bump in performance. Energy Aware Scheduling+ is a thermal management solution that promises to lower operating temperature by up to 4.5Â°C (the P60 had the non-plus version of this tech).

The chipset has hardware to do the heavy lifting when it comes to camera effects. Bokeh is rendered at 24fps, a 3x improvement in performance. It has a hardware warping engine for low-power electronic image stabilization (MediaTek says it saves 23mA per second vs. doing it on the GPU).