Apple also unveiled its tiny Mac Mini computer alongside theÂ new iPad Pro modelsÂ and theÂ MacBook Air (2018)Â at its hardware event in Brooklyn. Apple did not forget to refresh this tiny machine after a good four years, and itâ€™s an impressive upgrade too.

So, without further ado, let’s go check out the specs sheet, pricing, and availability details of the new Mac Mini.

The new Mac Mini now comes in a Space Gray finish on the outside â€“ with a similar design to its predecessor. Itâ€™s still the same flattened cube with rounded corners,Â an LED on the front, and a myriad of ports on the rear.

The Mac Mini now boasts of the latest internals, starting withÂ quad-core 8th-gen Intel Core processorsÂ and going up to hexa-core processors from the same family. It is the first time Apple has offered the latter on the Mac Mini. 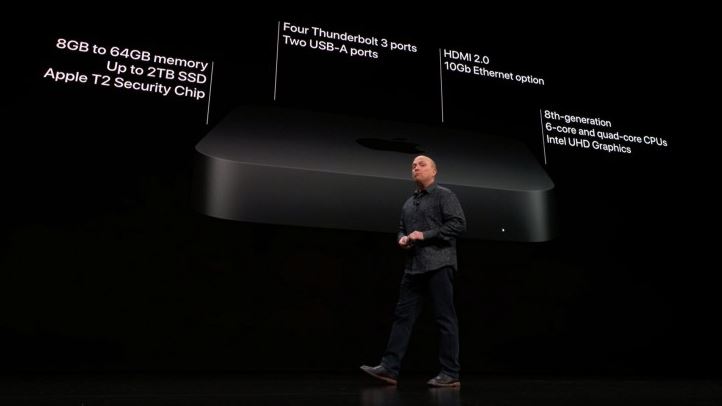 The 8th-gen processors are coupled with up to 64GB of 2666MHz DDR4 RAM and 2TB of SSD storage. Thereâ€™s no hard drive or Fusion storage options this time around as Apple decided to go with all-flash storage.

Apple has also packed inside the Mac Mini its second-gen T2 security chip that includes a Secure Enclave co-processor and useful for secure boot and encrypted storage capabilities. Thereâ€™s also a plethora of I/O ports including 4 Thunderbolt 3 USB-C ports, one HDMI 2.0, two USB-A ports, Ethernet, and the 3.5 mm headphone jack.

To sum everything up, you can check out the key specs of the Mac Mini in the table attached below:

The new Mac mini will be available from November 7 with pre-orders starting on October 31. Along with the new paint job, which is Space Grey, the Mac mini also has a new price tag.

The base model with Core i3 processor, 8GB of RAM and 128GB of flash storage asks $799, which is a considerable price hike over the $499 sticker on the previous generation. A fully tricked out version can go as high as $4,199.