By Andre Falana On Aug 10, 2018
Share
Join Us On Telegram
Related Posts

Sony may be struggling with the sales of its phone, but it’s another story when we talk about the home video game console as the Japanese corporation’s sales of its Playstation 4 systems is sky rocketing. A specialÂ 500 Million Limited Edition PS4 ProÂ has been announced to mark the sale of over 500 million PlayStation systems.

The Birth Of PlayStation

The first PlayStation was launched in Japan in 1994 and it has since then been making waves. The latest versions of the home video game console have been very successful in the market.

PlayStation 4 was announced in 2013 and it was followed by PlayStation 4 Pro in 2016. Both systems have put un-ending smile on the face of the manufacturer through their sales. In all, Sony Interactive Entertainment say it has sold over 525 million PlayStation systems worldwide since the console first launched 24 years ago. 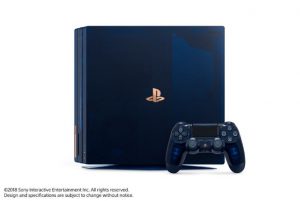 Each system will have a commemorative copper plate on its front, with its limited edition serial number etched on. Also, there will be a handful of â€˜extra specialâ€™ systems. These will have serial numbers that commemorate important events in the history of PlayStation e.g. US launch dates of various models.

How To Install Fortnite for Android On Your Phone