Android 9 Pie Officially Released: All About AI To Make Your Phone Smarter And Simpler

Google has officially announced its next major version of Android. The update which is called Android 9 Pie, is now available in its stable form and is now rolling out on Pixel devices. Devices from other manufacturers who were part of the beta program with Google will get theirs before the close of Q3 this year. 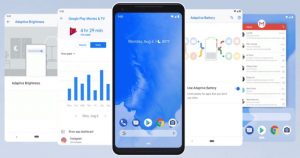 Android Pie is the ninth major release of Android and the successor to Android Oreo which was officially released last year. The latest update comes with several new features principally centered on the use of machine learning to make smartphones even smarter.

What Are The New Features Introduced?

One of these newly introduced feature includes Adaptive Battery. This looks for the apps you use less and cuts off resources to them to make your battery last longer. Similarly, Adaptive Brightness will automatically adjust the display brightness to your current location and what you are doing on the device.

Other use of machine learning is to make frequently performed tasks quicker. Slices (a pun on pie, apparently) is a new feature where apps can insert themselves into your searches so you can perform a task quicker. For example, if you search for Lyft in the Google app, Lyft will show a Slice with options to go Home or Work and you can tap those to quickly request a cab to those locations.

Another example is App Actions, which insert quick actions within the app launcher at certain times of the day based on your activities. You may see a button to quickly set navigation to your work place in the morning, or start a playlist when you plug in your headphones. These will improve as you use your phone.

Android Pie also introduces new system navigation. Three buttons at the bottom are now replaced by two, with the Overview mode being invoked by simply swiping up from the bottom in any app. You can interact with contents of the Overview windows without switching to them, including copying text from them and pasting into other using the updated Smart Text Selection feature.

Notifications have also been updated, with new circular icons and expanded previews for messages with smart reply options.

Later in the year, devices will also gain the Digital Wellbeing features, which includes a new Dashboard that tracks your app usage and set App Timers to prevent overusing apps and also Wind Down that switches on Night Light and Do Not Disturb and turns the display grayscale so you don’t overuse your phone before going to bed. These features can currently be downloaded on Pixel phones by signing up for the beta and others will get them later.

There’s a whole bunch of other features too in this update, including several security improvements, but we will have to look at them in detail at a later date.

For now, if you have a Pixel device (or an Essential Phone), you may have an update waiting for you in the Settings app.