In a bid not to relent in the war against fake news, WhatsApp has taken the war into another level after confirming via post on its blog that it’s rolling out a new feature intended to reduce the problem.

ALSO READ: 12 WhatsApp ‘Hidden’ Tricks You Might Not Know

The latest feature, which is pretty simple, will see all forwarded messages to you labelled as so in order to clarify to your friends which ones were written by you and which ones you resent. 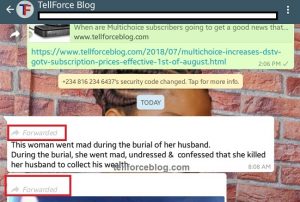 In the fight against fake news, this new labeling feature shouldn’t be expected to make a huge impact but it will certainly help shed light on the source of information ever so slightly for those on the receiving end. After all, to date, there was no way of telling which messages had been resent and which ones were brand new.

In the end, although the feature may not really be eliminating the source of fake news, the new label should make you as the receiver question the information receive through the app, thus reducing the speed at which you spread the information.

Also, it reconfirms the Facebook-owned messaging service’s stance on the problem and suggests the feature could be just the first of many new ones that could potentially be in the pipeline.

Has rain forgotten how to fall this year? Weather apps are...