One of the most popular messaging app, WhatsApp appears to keep updating its app for forever. That’s actually a good thing. A lot of updates have been rolling in lately from the company.

Another update for WhatsApp is slowly rolling out and it’s called “Suspicious Link Detection”.

ALSO READ: 12 WhatsApp ‘Hidden’ Tricks You Might Not Know 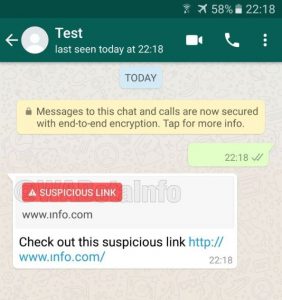 The latest update is yet to be available to all users as its still under development. This feature is expected to restrict the spammy links shared by some users.

This feature will help you to detect sent and received suspicious links in WhatsApp. The app analyzes when you receive it and detects if it redirects to a fake or alternative website. If the link is discovered to be suspicious one, it will present a message that is marked with a red label, indicating to you the presence of it. 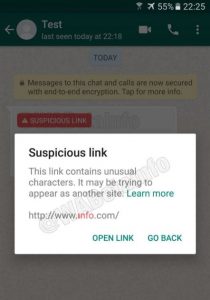 Regardless of the warning message, if you try to open the link, WhatsApp will alert you again that you’re trying to open a possible suspicious link.

The Facebook-owned company is still working on improving the new feature hence the delay in rolling it out. But in the next couples of days or weeks, it is expected to be available probably with an option for users to even report a suspicious link.