WhatsApp is not relenting at all in its war against the distribution of fake news. The last time on fight against fake news was the ‘forward’ indicator that comes with a message received from your friend, to show that the message was not typed by him/her. And now, the popular messaging service will no longer be able to forward messages to more than 20 people. 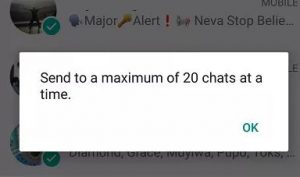 The recent move by WhatsApp is really a welcome one as the fake news could easily be tracked to an extent. However, this is going to generate mix feeling among users especially those that help in sending invites to their friends and family. But looking at it from another angle, forwarding fake news messages to 20 people may still appears to be too much as maximun 4 or 5 could easily help in tracing the source.

Some social networks and online platforms are as well said to be considering taking similar route.

Redmi Note 9 Series Dissembled: See The Differences Between the 4G and 5G models

President Buhari is fit enough to contest in 2019 – Rotimi...